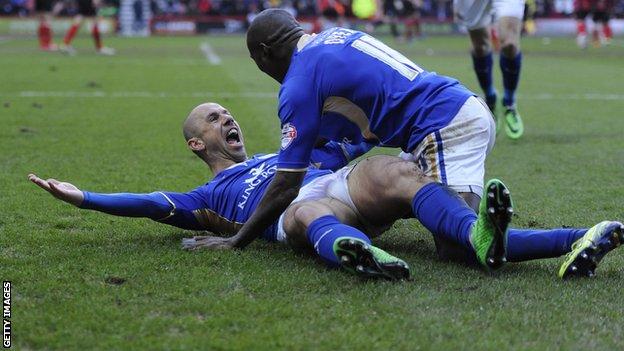 Kevin Phillips's controversial late goal meant Leicester extended their lead at the top of the Championship to 10 points with victory at Bournemouth.

The striker, 40, headed in Anthony Knockaert's cross to give the Foxes their ninth straight league win, though the home side felt the whole of the ball did not cross the goalline.

Lewis Grabban went closest for the Cherries with a long-range shot.

He was first called on to keep out Knockaert's close-range header, then blocked Lloyd Dyer's fierce strike from a tight angle before pushing Jamie Vardy's effort onto the crossbar.

After creating few meaningful chances in the first half, Bournemouth improved after the break as Grabban, looking for his 13th league goal of the season, had visiting keeper Kasper Schmeichel scrambling when his 25-yard strike flew just wide of the post.

But the goalscoring instincts of Phillips, who is closing in on 300 goals in his career, proved telling as the former England striker nodded past Camp.

Bournemouth, who are 14th, pushed in the closing stages but failed to really threaten Schmeichel as Leicester secured all three points.

"Our goalkeeper has had an excellent day between the sticks. He kept us in the game and we thought that might get us a point but it wasn't to be.

"The feeling from my players is that it wasn't a goal. I have only had a quick look at it and it is very close, you cannot really tell as it is a really bad angle."

"They showed what a good side they are. Nine wins in a row is a remarkable achievement and credit to them."

"Kevin Phillips is a striker and is smiling, he knows he has scored. I have not had a clear look at the incident and the goal but the assistant seemed pretty sure it went over the line.

"I know that he will contribute very positively to our season both in terms of what he can do on the pitch and off the field as well. He has a lot of experience.

"He is a goalscorer and his anticipation is excellent, he is in his forties so won't be as quick as he was 16 years ago but still creates a lot of space and time for himself because of his understanding of the game."