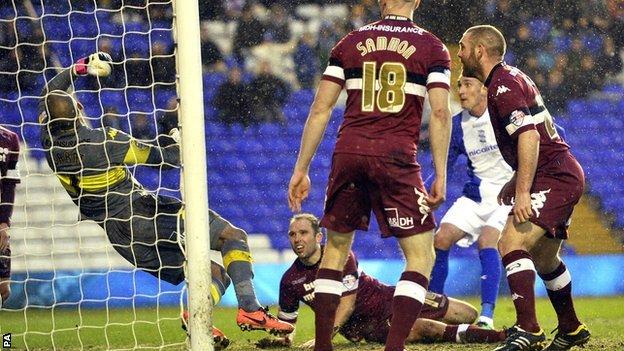 Rams midfielder Craig Bryson had a penalty saved before Brian Howard headed the home side into the lead.

Derby equalised a minute later when Patrick Bamford angled home, and went 3-1 up through Chris Martin's deflected shot and a Craig Forsyth strike.

Chris Burke's curler pulled one back for Blues before Macheda struck at close range from an injury-time corner.

Birmingham City are unbeaten in their past five games at St Andrew's against Derby County, whose last win there was a 4-1 victory in the old Division One in November 1995.

The draw left Blues still without a home league win since 1 October, while Derby failed to capitalise on promotion rivals QPR and Burnley drawing 3-3.

The Rams remain fourth in the table, four points behind second-placed QPR.

The visitors had the better of the first half and were awarded a 38th-minute penalty when Will Hughes was tripped by Tyler Blackett.

Birmingham went in front early in the second half, when Howard flicked home a header from Paul Caddis's right-wing cross, his first goal for the club.

Yet less than a minute later it was 1-1. Bamford smashed a shot against the woodwork before reacting quickest to get to fire home despite Will Packwood's efforts to block the shot.

Derby went ahead when Martin's shot was deflected in, before Forsyth capitalised on some slack defending to slot home the third after good work by Jamie Ward.

Macheda should have done better from close range before fellow sub Burke made things interesting with a 78th-minute strike, cutting inside to bend the ball beyond Lee Grant.

The equaliser then came more than three minutes into injury time as, also on his Blues debut, midfielder Emyr Huws flicked fellow on-loan Manchester City Albert Rusnak's corner onto the post and Macheda gleefully smashed in the loose ball.

Macheda, who came on as a 60th-minute substitute for Lee Novak, was one of five Blues debutants.

But 21-year-old Thorpe lasted just 14 minutes on his Football League debut before being stretchered off with an ankle injury, to be replaced by another deadline day signing Aaron Martin.

"The desire and never-say-die attitude was there for everyone to see. We could have buckled at 3-1 down against quality opposition but we kept going and got a terrific ending to the game.

"The lack of experience is scary at times but they're taking it in their stride and showing a mental courage to keep fighting and fighting.

"Federico didn't meet his team-mates until 12.30pm today so that's probably why he started on the bench. But he made a huge contribution and looked bright."

"We should have won it easily and instead we ended up drawing, so that's a disappointment. It's a harsh lesson for our team.

"The second goal we conceded was an absolute disgrace. It was a terrible goal. It's cost us. We've missed a great opportunity in a game we should have won, but that's football."