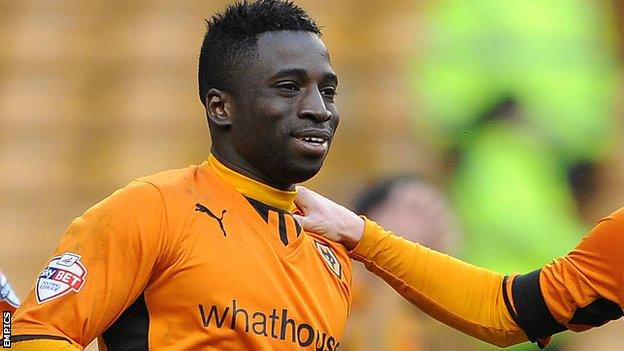 In-form Wolves moved above Leyton Orient into second place in League One after beating Bradford City at Molineux to record a fourth straight win.

The Bantams played for more than an hour with 10 men after Nathan Doyle's red card for two first-half bookings.

On-loan Adam Reach hit the bar for the visitors before Wolves midfielder Kevin McDonald fired in from outside the box.

Stephen Darby struck a post for the Bantams before Nouha Dicko turned in Bakary Sako's cross from close range.

It's the difference at McDonald's

Kevin McDonald's third goal for Wolves was his second in successive games - his first having come way back in August.

Apart from their efforts against the woodwork either side of the interval, Bradford failed to create many other clear chances and have now gone 11 league games without a win.

Wolves forced a succession of corners in the first period but were unable to make their pressure count until the closing moments of the half when Sako set up McDonald for his third goal of the season.

McDonald, who also netted the opener in had been the man fouled for the second of Doyle's yellow cards after 28 minutes.

Leon Clarke, given his first Wolves start after in midweek, twice headed off target and also saw a chipped effort cleared off the line as he failed to add to his 18 goals so far this season.

But Dicko found the net for the second home game in succession since his January move from Wigan to seal a comfortable win.