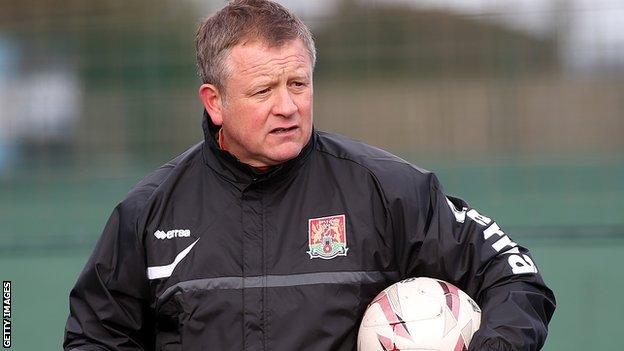 He saw his side fall behind after only 90 seconds when goalkeeper Matt Duke was duped by the swirling wind and Jamie Cureton tapped in with ease.

But they earned a valuable point thanks to Matty Blair, who poked home at the far post from Leon McSweeney's cross.

Cheltenham were the better side for the majority of the game but, after their 75th-minute equaliser, the Cobblers pushed for victory, Ian Morris and Darren Carter both going close.

Northampton remain six points adrift at the foot of the table while Cheltenham slip down a place to 13th.

"The performance wasn't too bad. We were creating chances and passing the ball. The conditions and the pitch were unbelievably bad and we're playing a team who won't finish bottom of the league."

"They've had a lift this week with a new manager coming in and also signing players. It wasn't a good time to be playing Northampton but we certainly did enough to win.

"We've not won enough at home. We've taken the lead enough times and sometimes it's the hardest thing in the world to come back. We have been too easy to score against at home this season."

"The players showed tremendous character in tough conditions. We were the better side in the second half and the spirit of the team was superb. It's a together squad.

"They've had a lot chucked at them in a short space of time this week, so we will get better. But there's something to work with.

"We've made a lot of changes this week. We're coaches as well as managers and we want to work with the players. I'm not expecting any more signings."