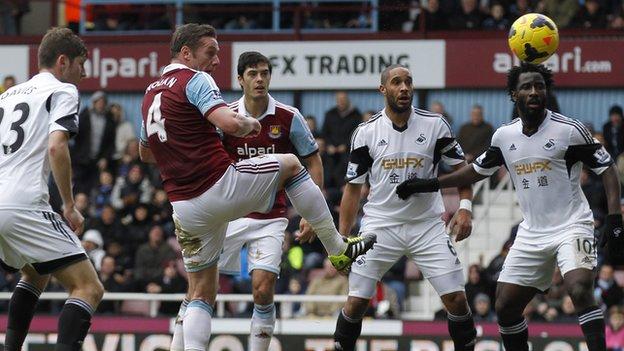 First Carroll headed a cross down for midfielder Nolan, who controlled the ball before driving home the opener.

He then nodded a corner across goal for Nolan to guide home with his head.

The England forward was harshly sent off after appearing to catch Chico Flores accidentally with his arm on 59 minutes, but West Ham held on to win.

Flores went to ground clutching his face and the hosts thought he had over-reacted, with replays showing contact looked unintentional as Carroll tried to untangle himself after an aerial challenge with the centre-back.

Despite their numerical disadvantage, the Hammers defended resiliently to comfortably keep the visitors at bay and secure just a second win from their past 11 home league games.

The Hammers remain in the Premier League's bottom three, although they moved to within two points of Swansea, who produced a lacklustre display and have taken just two points from their past six away matches.

It is three very big and well-deserved points for West Ham. Andy Carroll and Kevin Nolan were unstoppable in the first half and Swansea couldn't deal with them at all. West Ham might appeal against Carroll's red card as Chico exaggerated any contact.

And they were rewarded when they took the lead with the game's first shot on target.

From a diagonal left-wing cross, Carroll cushioned a header down for Nolan, who controlled the ball on his thigh before driving in a left-foot shot.

And the former Newcastle team-mates linked up to double the home side's lead just before the break.

Carroll did well to reach a Stewart Downing corner to the far post and nod the ball across goal, where Nolan was lurking to guide in a header.

The goal means six of Carroll's past 11 assists in the Premier League have been for Nolan goals.

Swansea, for their part, are certainly in need of a greater goal threat, and the imminent return to training of the injured Michu, their top scorer last season, cannot come soon enough.

Their main chance in the first half came when forward Wilfried Bony raced through on goal, only to be denied by a last-ditch James Tomkins tackle.

They continued to struggle after the break and, even when Carroll was sent off, the visitors could not find a breakthrough as they failed to trouble Hammers keeper Adrian.