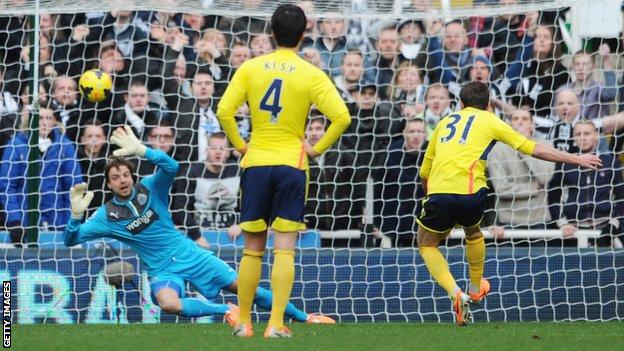 Fabio Borini gave the Black Cats the lead from the spot after Vurnon Anita's clumsy challenge on Phil Bardsley.

Newcastle improved in the second half, but were hit on the counter-attack by Colback's smart finish.

In the week they lost Yohan Cabaye to Paris St-Germain, the Magpies, who were booed at half-time and the final whistle, extended their recent run of disappointing results to only one win in seven games.

They have failed to score in five of their last six league games and were again short of ideas.

Too often they were slow to get bodies forward, particularly in a first half that saw Ameobi brothers Shola and Sammy start together for the first time.

The hosts at least came to life after Sammy was withdrawn in favour of debutant Luuk de Jong at half-time.

Cheick Tiote's long-range drive drew a flying save from visiting keeper Vito Mannone and, from the resulting corner, Shola Ameobi should have done better than heading wide from six yards out.

It's a sign of the way things are going for Sunderland that there a no histrionics, no sliding on the knees, just quiet celebrations. It's another devastating defeat for Newcastle, as Sunderland win three derbies in a row for the first time in 91 years.

The older Ameobi, recalled for a fixture in which he has scored seven goals, was denied when through one-on-one with Mannone, and later saw a header cleared off the line by Borini.

But by then the damage had been done by a Sunderland side visibly confident after a run that has now seen them go eight games without defeat.

Not only were they quick to get men behind the ball - deadline day signing Liam Bridcutt patrolling in front of the defence - but Gus Poyet's side also looked potent going forward, particularly in the shape of the excellent Johnson, who continued his recent fine form.

After a slow start, the Black Cats took the lead when referee Phil Dowd correctly adjudged that Anita had fouled Bardsley in the box.

With Bardsley running on to Johnson's clever flick between two defenders, Anita crudely cut across and failed to get the ball, leaving Borini to blast high past Krul's right hand.

Soon after, the lead was doubled thanks to a smart move down the Sunderland left.

Jozy Altidore's flick released Colback, whose shot ricocheted off Steven Taylor and bounced away from Krul to the far post, where Johnson swept into an empty net for his sixth goal in four league games.

Though they were pegged back by Newcastle's second-half resurgence, Sunderland still managed to create chances to extend their lead.

Johnson's wriggle through a crowd ended with a curling shot off the post and Altidore was denied when through on goal by Krul's bravery.

But when Colback won the ball on the halfway line, got it back on the left of the penalty area and finished high across goal, the Wearsiders matched their score in the same fixture last season and completed a third straight derby success for the first time in 91 years.

Sunderland manager Gus Poyet on Adam Johnson: "If he continues to play like that, no doubt he can go to the World Cup and we will be safe from relegation. We were good in December, but something was missing. Now, he is creating the difference.

"He has not been more confident during his time at Sunderland. I say it's not all about blaming the player. When you have a player of his quality, you have to play a certain way to take advantage."

Johnson: "I'm in one of those sort of moments. January has probably the best month I've had as a footballer. I'm scoring goals and creating others. It's been great.

"I haven't felt any different. Things have started to go for me. I wasn't trying anything before, it just wasn't coming off for me. Now it's turned, I'm enjoying it.

"Of course I have missed international football. It's the best thing of all to play for England. A few months ago I didn't think I have a chance, but maybe I do now. It's a good time to do it."