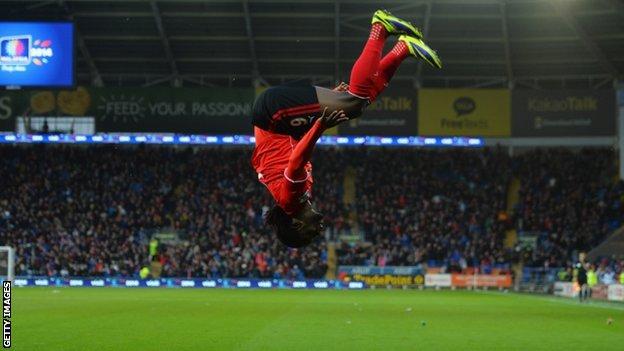 Cardiff came from behind to beat Norwich, picking up their first points under Ole Gunnar Solskjaer and climbing off the bottom of the league table.

But Cardiff scored two goals in as many minutes as Craig Bellamy slotted in debutant Wilfried Zaha's pass before fellow signing Kenwyne Jones tapped in.

Norwich struck the woodwork twice and Cardiff keeper David Marshall made three fine saves as the hosts held on.

Much of the credit for the victory must go to Solskjaer, who, despite losing his first three league games in charge, showed his willingness to make big calls in throwing on Zaha for the ineffective Peter Whittingham six minutes before the break.

With Jones, Bellamy and Craig Noone all pushing forward, suddenly the previously lacklustre hosts offered a threat from all angles and the two goals came in the midst of a spell of relentless pressure.

Although their team remain in the bottom three, Cardiff fans will have left the stadium with renewed optimism, having seen two of their new signings hit the ground running under a bright young manager who is not afraid to trust his instincts.

Norwich, meanwhile, will rue their misfortune after a result that sees them slip to 15th in the table with just one win in nine games.

Not only did they come up against an inspired opponent in the shape of their former keeper Marshall, they also had two goals disallowed for offside.

In total, the Canaries managed 27 shots to their opponents' 14, the last of them arriving in stoppage time when captain Sebastien Bassong headed Snodgrass's free-kick over the bar from close range.

If the debuts of Jones and Zaha were both successful, that of Fabio at right-back was far less convincing.

The Brazilian, a transfer window signing from Manchester United, was at fault for Norwich's goal as he allowed Olsson to get in behind him and slide over a pass that was deflected into the path of Snodgrass, who applied a simple side-footed finish.

Cardiff's response was restricted to long-range efforts from Jordon Mutch and the impressive Noone, and Solskjaer reacted to a lack of bite by sending on former Crystal Palace winger Zaha.

The Manchester United loanee received a huge cheer when he entered the fray and rewarded the crowd's encouragement with a decisive intervention four minutes after half-time.

Drifting inside from the left flank, he spotted Bellamy's run and slid in a perfect through-ball, which the Welshman steered under John Ruddy.

Two minutes later, Norwich failed to clear a corner and when Mutch curled over a cross from the right, Jones hooked home at the second attempt.

There was no let-up in the tempo, with chances at both ends. Marshall tipped Bradley Johnson's long-range shot onto the bar before Jones almost added a third for Cardiff when Mutch's effort deflected off his body and onto the post.

Marshall came to Cardiff's rescue again late on when he brilliantly saved Nathan Redmond's goalbound shot. The ball broke to Gary Hooper, whose hooked effort was cleared off the line by Bellamy.

Another sharp save denied substitute Leroy Fer and even when Snodgrass managed to beat the keeper with a near-post header, he saw his effort rebound off the post.

Five minutes of stoppage time cranked up the tension among the home fans and their hopes were almost dashed when Bassong rose to meet Snodgrass's delivery, only for the defender to power his header wastefully over.

Norwich manager Chris Hughton: "We probably needed that second goal and I thought on the balance of play that we might have got it.

"But you've got to start the second half well, and we've made two really poor mistakes that led to their goals and that changes the whole atmosphere in the stadium.

"Their goalkeeper had a good day but if we make mistakes like we did we have to be scoring goals at the other end.

"We are angry because we have come away with nothing from a game we should have won but I can't fault the effort and determination to get back in the game."