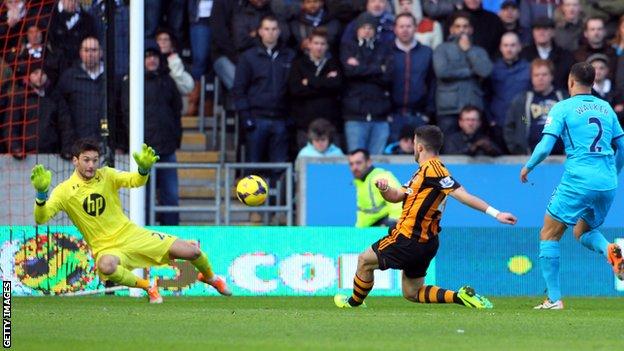 That was Hull's first league goal in 2014, and they almost added a second when Jelavic sent a free-kick wide.

Paulinho equalised for Spurs with a smart turn and shot, with Jelavic denied a late winner for Hull when his low drive was kept out by Hugo Lloris.

Despite squandering that late chance, Hull - two points clear of the relegation zone - are likely to be the happier of the sides.

Their new front two of Long and Jelavic showed signs of a promising partnership that should possess the firepower to pull them away from danger.

Prior to this game, Hull had gone four league games without either a goal or a point since putting six past Fulham on 28 December

Tottenham, meanwhile, started the day in fifth but, despite the 5-1 midweek home defeat by Manchester City, would have been confident of closing the gap to fourth-placed Liverpool, given they had won their five previous away games.

Neither side had any transfer deadline-day signings to show off at the KC Stadium, but it was Hull's two key January buys who combined to good effect early on.

A long ball by veteran Steve Harper - in goal for the suspended Allan McGregor - was flicked on smartly by Jelavic to send Long clear and the Republic of Ireland international confidently slotted beyond Spurs keeper Lloris.

It was an opportunist goal for Hull, with Tottenham dominant in possession but their front two of Emmanuel Adebayor and Roberto Soldado frustrated by a well-marshalled home defence.

Soldado fired wide from a difficult angle before Christian Eriksen bent a shot narrowly off target after running at the Hull defence.

But in truth, Spurs were not showing the kind of potency in attack that has seen them score at least once in every league game under Tim Sherwood and instead it was Hull who came closest to scoring a second before the break, Jelavic curling a 22-yard free-kick wide of the post.

Tottenham improved after the break but their inability to impose themselves in the final third was telling as a tame Soldado shot was straight at Harper.

The visitors were in need of some inspiration and that finally came courtesy of Paulinho. The midfielder, back in the side after a month out with an ankle injury, superbly brought a speculative long-range Danny Rose strike under control with his first touch, before lashing into the roof of the net with his second.

That goal opened the game up as Curtis Davies stabbed the ball away from the feet of Adebayor on the goalline, moments before Jelavic's goalbound shot was hacked away by Michael Dawson.

The action continued to swing from end to end but it was Hull who came closest to snatching the three points as first Jelavic's angled drive was held by Lloris before Tom Huddlestone's driven free-kick just evaded several team-mates.

"I thought a draw was a fair result. There was an element of luck with their goal with Danny Rose smashing a shot, but to be fair to Paulinho he finished it well. We had arguably the better chances but we have got off 23 points and we were on that for a long time.

"Shane Long is a player we have not had before because of his pace, which gets him away from defenders. His goal summed it up, he got the flick on and burst through.

"I thought we played well. We had some good opportunities in the second half. We never took the chances and the positive to me is that we ground it out. If we are not going to win the game we are certainly not going to lose.

"We thought we should have won the game but you have to give Hull credit, they are fighting for their lives and they dug it out."