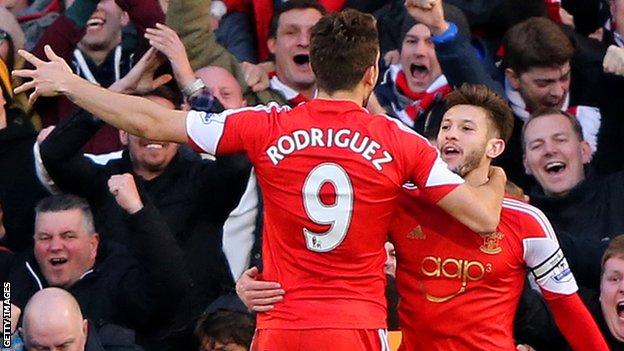 Fulham fell to the foot of the Premier League table after Southampton struck three goals in 11 second-half minutes.

Adam Lallana, Rickie Lambert and Jay Rodriguez were all on target as they boosted their World Cup chances in front of England boss Roy Hodgson.

Lallana, making his 250th Saints appearance, was set up by Lambert, who scored himself before his long pass set up Rodriguez to curl in.

Fulham have now lost five of their past six league matches, conceding 18 goals.

Saints, meanwhile, are four games unbeaten in the league and strengthened their grip on ninth place.

But the problems continue to pile up for Cottagers head coach Rene Meulensteen after a busy deadline day failed to have the desired impact.

The Dutchman made four changes from the midweek defeat at Swansea, with January arrivals William Kvist and Lewis Holtby both handed debuts. Their fellow new recruits Konstantinos Mitroglou, Ryan Tunnicliffe, Larnell Cole and Johnny Heitinga were not in the 18-man squad.

Victor Wanyama and Lambert both returned for the Saints, who found themselves on the back foot in the opening exchanges.

Scott Parker's attempted chip was comfortably saved by Artur Boruc before Holtby, signed on loan from Tottenham, made his first contribution with a deep corner which Dan Burn headed just over the crossbar.

Yet Southampton grew in confidence and Cottagers goalkeeper Maarten Stekelenburg was tested for the first time when Rodriguez's cross was inadvertently deflected goalwards by Steve Sidwell's outstretched boot.

At the other end, Boruc showed fine reflexes with a one-handed save to turn Brede Hangeland's header away for a corner midway through the first half.

Saints had their goalkeeper to thank once again when he twice foiled Darren Bent in a matter of moments - first reacting swiftly to repel the forward's sweeping strike following a slick move involving Holtby and Parker, and seconds later blocking a low shot.

Jack Cork was introduced for Wanyama at the break, and the attack-minded switch paid dividends.

The deadlock was broken midway through the second period when Lambert fed Lallana down the left channel and, despite the angle being tight, the midfielder drilled a low strike inside the right post.

It meant the Cottagers' wait for a Premier League clean sheet goes on - leaving them nine games without one, dating back to early December.

Saints continued to surge forward and they soon had a second when Nathaniel Clyne's cross from the right was intelligently left by Rodriguez, who had spotted the unmarked Lambert behind him, the striker driving an emphatic low shot into the corner.

Mauricio Pochettino's team looked back to their fluent early-season form - and they put the match beyond doubt with a ruthless counter-attack.

Lambert, midway in his own half, picked out Rodriguez down the left and he cut inside and bent a fantastic finish over the head of Stekelenburg.

"In the first half Fulham played quite deep and made it difficult for us to open up spaces. Once we scored the first it became a lot more simple.

"I'm very happy with the three goals - I liked them all and each was different in its own way. It's a performance I was proud of."

On his England trio's World Cup chances: "There is still time until Brazil but it was very important that the three played well in order to have a chance of making the plane."