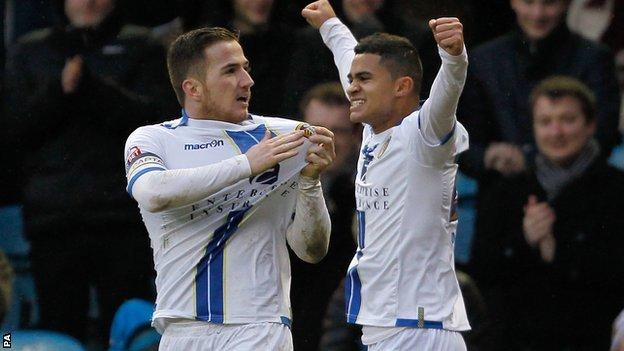 Ross McCormack scored a hat-trick as Leeds thrashed Huddersfield amid confusion over who was United's boss.

Manager Brian McDermott was reportedly sacked on Friday but the club have since said he remains in charge.

Jimmy Kebe finished from McCormack's pass and Alex Mowatt chipped in a fifth goal after Daniel Ward had given the visitors the lead with a low strike.

Cagliari owner Massimo Cellino has made an attempt to buy a 75% controlling stake in Leeds, subject to the deal being approved by the Football League, with the Italian wanting to appoint a new person in charge.

Assistant manager Nigel Gibbs took control of first-team affairs after McDermott reportedly received a phone call on Friday night informing him that he had been dismissed.

With the Elland Road fans chanting their support for McDermott throughout, Leeds looked determined to win the game for their manager as they demolished their Yorkshire rivals.

It was not a good start for the hosts though as Ward fired a crisp finish beyond Paddy Kenny from the left to deepen Leeds' misery.

But led by captain McCormack, who spoke in favour of McDermott on Friday, Leeds ended an eight-match winless run to give a supportive home crowd something to cheer about.

McCormack committed his future to the Whites after a bid from Cardiff was turned down on Friday and he responded in fine style to take his season goal-tally to 22.

All of Leeds' goals were celebrated by songs of support for McDermott, who opted not to attend the match.

McCormack equalised from close range just before the break before putting Kebe through to make it 2-0 soon after the restart.

Rodolph Austin then crossed for McCormack, who tapped in his 50th Leeds goal, before he completed his treble from Cameron Stewart's cross.

Mowatt chipped in a first senior goal from 20 yards to cap the victory.

However, the managerial saga then took another twist after the final whistle as Leeds released a statement on their website stating McDermott was still in charge.

"The disappointing thing for us is that we did well. We didn't take our chances and when they scored it really sent us reeling.

"The belief went from our back lads and it went throughout the side. It started to have a knock-on effect.

"We did well in the first half. The conditions were difficult for both teams but we had a foothold. We should have been out of sight."