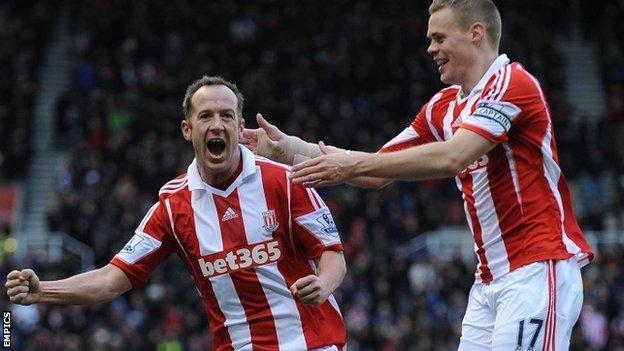 Charlie Adam's double strike gave Stoke their first league win over Manchester United since 1984 on a miserable afternoon for the champions.

United started with Juan Mata, Robin van Persie and Wayne Rooney for the first time but fell behind when Adam's free-kick flew in off Michael Carrick.

Van Persie levelled with a neat finish just after half-time.

But Adam quickly restored Stoke's lead in spectacular style with a fierce 25-yard strike into the top corner.

The closest United came to an equaliser was Rooney's injury-time free-kick, which was brilliantly tipped on to the post by Asmir Begovic before Stoke cleared their lines.

With his three best attacking players lining up together for the first time, this was supposed to be the start of a bright new era for United and their manager David Moyes, but instead it became an all-too familiar nightmare that will further dent their hopes of a top-four finish.

Moyes suffered his eighth Premier League defeat in 24 games in a match that he will remember for horrific weather conditions and injuries to both his starting centre-backs, Jonny Evans and Phil Jones.

United defeats in the top flight

The last time that Manchester United lost as many as eight of their opening 24 games in a league season was in 1989-90, when they lost 11 times and finished in 13th place.

United have now lost more games than in any Premier League season since 2003-04, when they lost nine in total.

Wins for West Ham and Sunderland had seen the Potters slip into the bottom three before kick-off but Stoke did not perform like a team who had taken one point from their previous six games.

The fierce wind that swirled round the Britannia Stadium made it difficult for both teams to settle but, just when United had forced their first sustained spell of pressure, Adam struck to put his side in front.

There was a lot of luck about his first goal, his 30-yard shot cannoning off Carrick and looping into the opposite corner past a stranded David De Gea.

Things got worse for Moyes when Jones fell awkwardly after a clash with Jon Walters and had to be carried off.

The United boss had already moved Chris Smalling back into the middle of his defence when Evans was injured, and his lack of defensive options meant Carrick had to drop into the back four.

Moyes had little choice but to adopt an attacking approach to get back into the game and that paid off seconds after the interval when Mata teed up Van Persie, giving the Spaniard his second assist in two games for United.

But the visitors were only level for five minutes, and there was no fortune about Adam's second strike, which flew past a startled De Gea with the help of the wind.

By now the game was wide open, with United pressing hard but seeing Stoke create the best chances on the break, and Marko Arnautovic curled a shot wide for the home side before substitute Oussama Assaidi volleyed over.

United piled on the pressure in the closing stages, flinging a series of crosses into the Stoke area, and with seven minutes of injury time to be played, they had hope.

But Rooney's curling shot was clawed to safety by Begovic and Stoke held out, ending a run of 11 defeats and one draw against United in the Premier League with a famous victory.