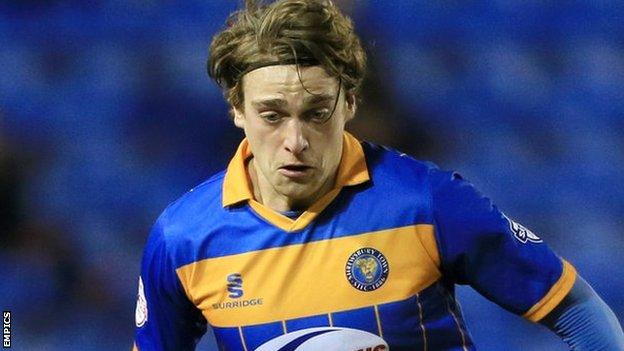 Marcello Trotta looked to have earned an away win on 68 minutes, slotting in the rebound from close range after Chris Weale had saved his penalty.

The spot-kick appeared harsh, Town defender Ryan Woods having been adjudged to have fouled Alan Judge.

But Eaves levelled, firing left-footed into the top corner from 15 yards.

Smiling again at the Meadow

Town had the best chances in a goalless first half, Eaves firing wide before on-loan Celtic striker Bahrudin Atajic, on his home debut, volleyed narrowly over from Paul Parry's left-wing cross.

Eaves then had a header nodded off the line early in the second half by Adam Forshaw.

Brentford broke the deadlock when Judge fell under Woods' challenge and, although Weale saved Trotta's spot-kick, the rebound went straight back to the Italian, allowing him to net his 11th of the season.

In his second game in charge since being put in temporary charge after Graham Turner stepped down, it was a first point for Town caretaker manager Mike Jackson, ending the run of four straight defeats that had plunged the Shropshire side into the relegation zone.

It also ended their run of six straight home defeats at the Meadow, moving Town up a place to 21st in the League One table.

Brentford, now unbeaten in 18 matches, stay top, but are now just two points clear of Wolves, who have moved into second place.

"It is a pleasing result, especially after our home form recently. It wasn't a great day with the conditions but we deserved it. This is just the start.

"It is about time Tom Eaves scored. He needed that. He is a confidence player. I am made up for him scoring against the league leaders, because it wasn't easy.

"The penalty was given. There is nothing we can do about that. But we must be better with collecting the rebound. It is certainly something we should be working at."

"It's always disappointing to concede a goal but, overall, we have to be happy as it was difficult conditions, and the ball just dropped and the guy hit a great strike.

"It's a great club here. The whole environment within the club is great.

"We've got the best squad in the division and, when you see how hard they work, you think they have got to have a chance.

"We believe we can be successful but we look at short-term rather than long-term targets."