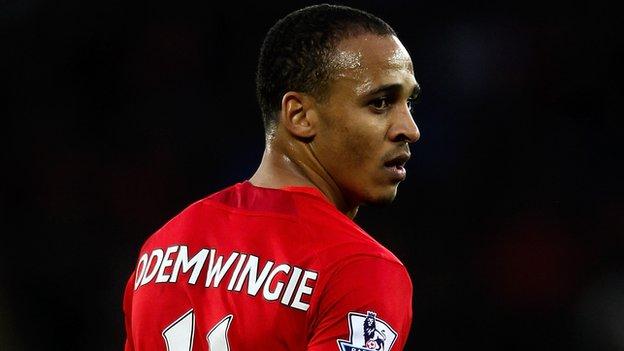 The switch is expected to be finalised once Jones, 29, has completed a successful medical.

Nigeria international Odemwingie has struggled at Cardiff since joining in the summer and is out of favour under new boss Ole Gunnar Solskjaer.

The 32-year-old is keen to revive his career at Stoke, who inherit his two-year contract with the Bluebirds.

Stoke have confirmed that the two clubs have reached an agreement on the deal.

Having scored only two goals in 17 matches for Cardiff following his £2m switch from West Brom in the summer, Odemwingie knows he needs to improve to force his way into Nigeria's World Cup squad.

Odemwingie started his career in Nigeria with Bendel Insurance before switching to Belgian side La Louviere. Further stints at French club Lille and Lokomotiv Moscow followed before he joined the Baggies for £2.5m in 2010.

Meanwhile, Jones looks set to leave the Potters just a week after being dropped for the 1-0 defeat by Crystal Palace following his refusal to play against Liverpool six days before.

The Trinidad and Tobago international first joined Stoke on loan from Southampton in 2005.

He then became the Potters' record signing when he joined them in August 2010 from Sunderland for £8m and went on to score 26 goals in 115 appearances in his second spell with the club.