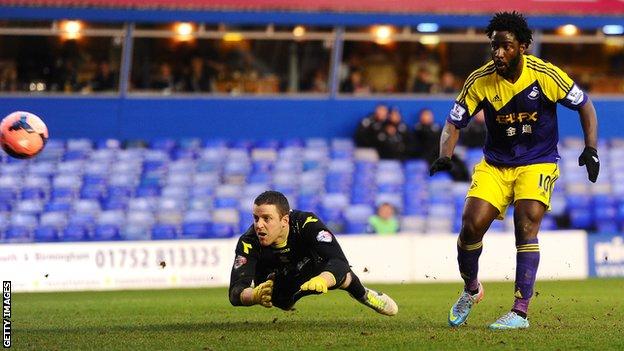 The Swans had been trailing to a Lee Novak goal in the fourth round tie at Birmingham City.

But the introduction of Bony at half-time changed the game, with the Ivorian scoring twice in three minutes.

"He has a cool head, you can see how he finished his goals, he is playing with confidence," Laudrup said.

"We talk about the need to adapt on the pitch and it is not easy as a foreign player. I have been a foreigner in most of the counties I played in and I understand that," Laudrup added.

"But when you have a big price tag it is about patience and I am happy for him and the team.

"I thought the way they played in the first half meant we had to bring on Bony and he scored two great goals to turn the game.

"The first goal is a great finish, the second goal is one you do not score without confidence and that is very good to see."

Swansea's victory at St Andrew's came at the end of what had been a difficult week for the Welsh club, dominated by the training ground row between Chico Flores and Garry Monk.

Reports also questioned the long-term future of Laudrup following a poor run of results in the Premier League which has not seen them win since 4 December.

"In football, at this level, you go through moments once in a while [that are] difficult moments," Laudrup said.

"To be fair Swansea hasn't been through that for some years.

"I believe in the squad. I hope a game like this will help them.

"Hopefully we can build on this result in the game on Tuesday against Fulham."

Swansea have been linked with Norwich City winger Anthony Pilkington but Laudrup refused to comment on reports.