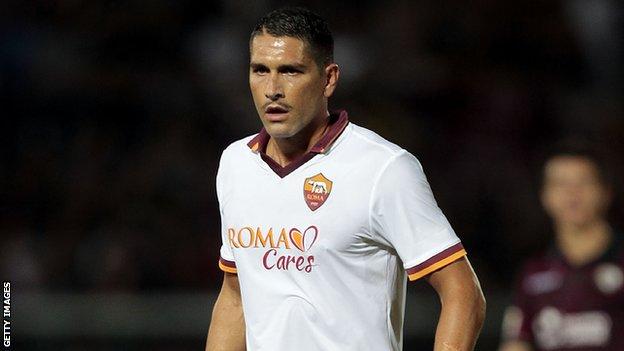 West Ham United have signed Roma striker Marco Borriello and AC Milan midfielder Antonio Nocerino on loan until the end of the season.

Both players are Italy internationals, with Borriello having won seven caps and Nocerino playing 15 times.

Borriello, 31, has made 11 Serie A appearances this season for title-chasing Roma, scoring once.

Nocerino, 28, has played 16 times this season, including in the Champions League.

He began his career with Juventus and joined Palermo in 2008 before moving to the San Siro in 2011.

The Naples-born player was part of the Italy team which knocked England out of Euro 2012 in the quarter-finals.

Borriello started his senior career at Milan, having several spells away on loan before joining Roma in 2010. He had a loan spell with Juventus in 2012 and spent last season with Genoa.

West Ham manager Sam Allardyce is looking to strengthen his struggling squad and failed in a bid, reportedly worth £3.5m, to sign Leeds United striker Ross McCormack on Friday.