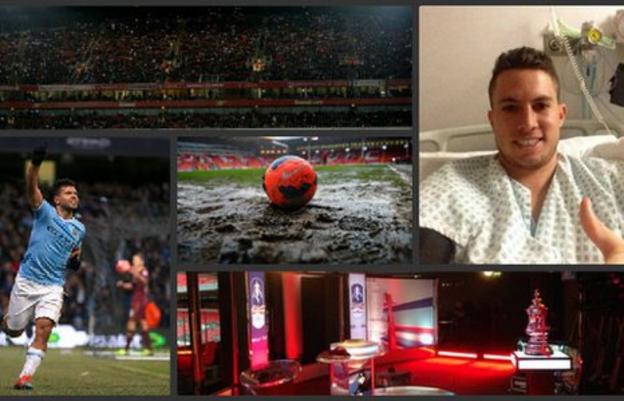 The lights went out at Arsenal but not on Manchester City's quadruple dream. A weekend of few, if any, real FA Cup shocks saw all the major teams still in the tournament progress to the fifth round.

It was a weekend of worrying injuries, terrible weather and an intriguing FA Cup draw. BBC Sport takes a look at the main five talking points of the weekend.

It says a lot about how spectacular Manchester City have been this season that they were still bookmakers' favourites to win despite trailing 2-0 to Watford. Manuel Pellegrini made three substitutions, including bringing on two defenders at half-time, as they rallied to score four goals in the last half an hour.

Manchester City boss Manuel Pellegrini: "If I could change 11 players at half-time I would have done.

"I don't know what will happen in the future but I am absolutely sure that if we played as we did in the first half, it's impossible [to win the quadruple], but if we play as we did in second half maybe we can continue in all the competitions."

Kevin Kilbane on BBC Final Score: "Watford went 2-0 up but I think we always knew City would come back. They showed a real spirit and we saw a different side to them today. They seem to have this extra gear that they can step up to when they need to."

A draw to remember

The Premier League's top four face each other in two of the first three fifth-round ties out of the hat. Manchester City v Chelsea was first out, with Arsenal v Liverpool soon after.

Leaders Arsenal are now scheduled to play Liverpool and Manchester United in the league, the Reds again in the FA Cup and Bayern Munich in the Champions League in the space of 12 days in February.

There will be at least one Football League team in the quarter-finals, with Sheffield Wednesday facing Championship relegation rivals Charlton Athletic in round five.

Manchester City defender Vincent Kompany: Chelsea coming to the Etihad in the FA Cup. Another, game to look forward to. #mcfc

Chelsea striker Romelu Lukaku, on loan at Everton: Ooooooh what a draw....#FAcup 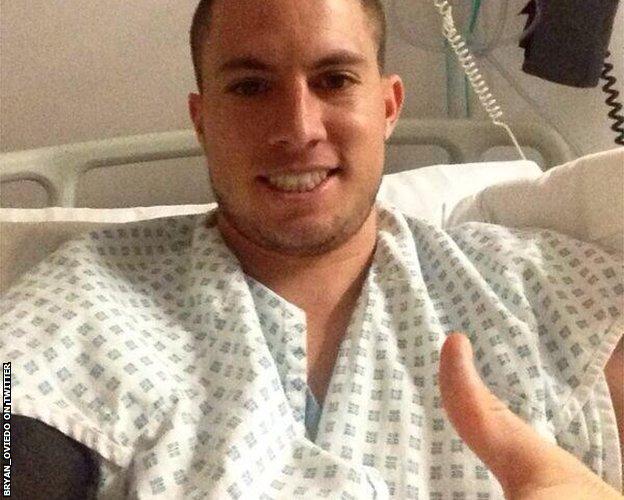 Everton midfielder Bryan Oviedo suffered a double broken leg during his side's 4-0 win over Stevenage. Several of the 23-year-old's team-mates were unable to look during almost six minutes of on-pitch treatment. The injury means he is likely to miss this summer's World Cup for Costa Rica, England's group opponents.

Another horrible injury appeared to befall Crystal Palace defender Jonathan Parr, who suffered a serious-looking neck injury after a mid-air collision with Callum McManaman. The 25-year-old needed several medical staff to help him on to a stretcher as he wore an oxygen mask.

It wouldn't be an FA Cup day in the winter without muddy pitches and terrible weather.

Bramall Lane played host to Sheffield United's game with Fulham, although the game had been in doubt because of a muddy pitch. Pockets of the surface including in the penalty areas were mud-caked.

BBC Sport's Chris Bevan was at Bramall Lane: "The pitch was so soggy after torrential rain on Sunday that referee Andre Marriner inspected it three times before giving the game the go-ahead.

"In one goalmouth, when Marriner threw the ball up in the air, it just landed splat in the mud, no bounce whatsoever. Fulham forward Muamer Tankovic had a fierce driven cross across the face of goal that stopped dead in the six-yard box."

Please use your phones

Several of the lights went out for the final few minutes of the first half between Arsenal and Coventry, with the Gunners winning 2-0. Referee Robert Madley asked both captains if they were happy to play on, with both agreeing. Thousands of fans of both sides then used the flashes on their phones to help the players get through the first half, with the problem sorted at the break.

BBC Radio 5 live commentator Conor McNamara: "This is brilliant. Everyone around the stadium has turned on their smartphones and they are illuminating so we have extra light. It's like being at a concert during a particularly mushy ballad.

"It's like Christmas lights in January. A wonderful scene as tens of thousands of people are using the torches on their phones."

Stats of the weekend