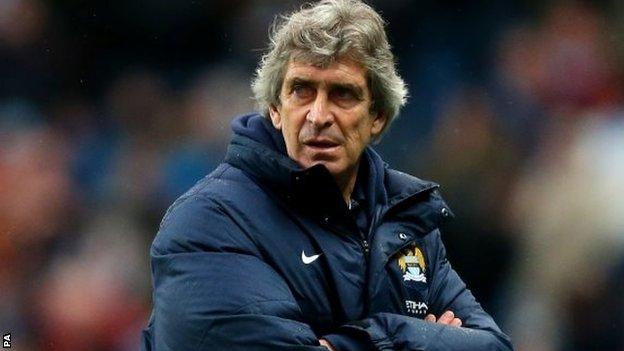 Manchester City manager Manuel Pellegrini said his side have no chance of winning the quadruple if they play like they did in the first half of their 4-2 FA Cup victory over Watford.

Trailing by two goals at half-time, City were saved by a second-half Sergio Aguero hat-trick.

But Pellegrini said he was pleased by their reaction to come from behind.

Pellegrini made two changes at half-time against Watford, bringing on Pablo Zabaleta and captain Vincent Kompany in place of Micah Richards and Jack Rodwell

"If I could change 11 players at half-time I would have done," the Chilean revealed.

"I don't know what will happen in the future but I am absolutely sure that if we played as we did in the first half, it's impossible [to win the quadruple], but if we play as we did in second half maybe we can continue in all the competitions."

Watford were good value for their lead at the break after a clever counter-attacking display by Giuseppe Sannino's side, and were three minutes away from taking the fourth-round tie to a replay.

Fernando Forestieri and Troy Deeney put Watford two up, a lead they held until the 60th minute.

But Aguero scored twice and when goalkeeper Jonathan Bond let Aleksandar Kolarov's 87th-minute shot through his grasp, it gave City the lead for the first time.

Aguero's 90th-minute header chalked up his 25th goal of the season and maintained the hosts' 100% home record in domestic competitions this season.

They reached the Capital One Cup final with a 9-0 aggregate victory over West Ham last Tuesday, City trail Premier League leaders Arsenal by a point, and face Barcelona in the Champions League last 16 in February.

Pellegrini, who cut an agitated figure on the sidelines, admitted he did not want Aguero to play the full game with the Argentina international recently returning from a calf injury.

But such was his side's predicament, he left City's leading scorer on the pitch.

"Sergio is a top player who is very important to us," Pellegrini added. "The first idea was for him not to play the 90 minutes. He has played 30, 45 and 60 minutes since returning and the idea was to play him for 60 or 70 minutes.

"But he had to play the whole match and he made the difference."

Although Pellegrini said he was worried by the first-half display, he claimed the performance would not influence his thinking in the transfer market.

"It is not our first concern at the moment but we will see what happens in the future," he said.

"I don't think I have weak feelings about the team for one half of a game. I was very worried because in the cups, teams from lower divisions have a lot of motivation.

"If you don't play with 100% concentration and intensity you will not win the game. Watford did that in the first 45 minutes; we played jogging and that way is impossible to win.

"Watford didn't surprise me. If you give professional players time and space they will make the difference.

"If we didn't make good pressing we were not going to have an easy game. That was what happened in the first half - and we were a disaster defending."