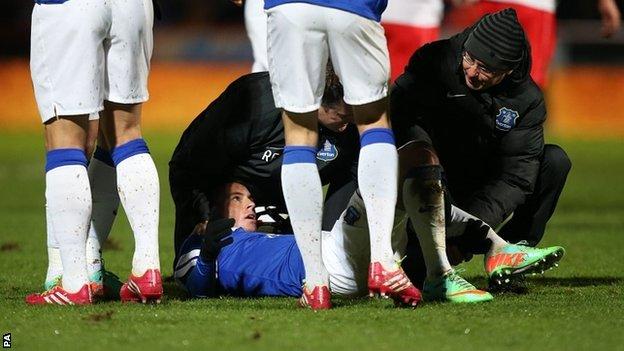 Bryan Oviedo suffered a broken leg during Everton's 4-0 victory at Stevenage in the fourth round of the FA Cup at Broadhall Way.

The 23-year-old Toffees and Costa Rica midfielder was taken to hospital after injuring his left leg while trying to block Simon Heslop's shot.

Several of Oviedo's team-mates were unable to look at the injury during four minutes of on-pitch treatment.

Costa Rica are in the same World Cup group as England, Italy and Uruguay this summer.

Oviedo, who can also play at left-back, joined Everton from FC Copenhagen in August 2012 for £5m.

He has made 31 appearances for the Toffees, scoring twice - including the only goal against Manchester United in December.

"It was a very unfortunate action, nothing malicious," Martinez said.

"It gives you a really bad taste in the mouth. You won't meet a nicer human being than Bryan and this was becoming his season.

"He has shown the quality that he has recently and it's one of those moments where you feel terribly sad for him because he was in good form and the World Cup was just around the corner for him but now we have to make sure he gets fully recovered and he comes back as important player as he has been for the club recently."