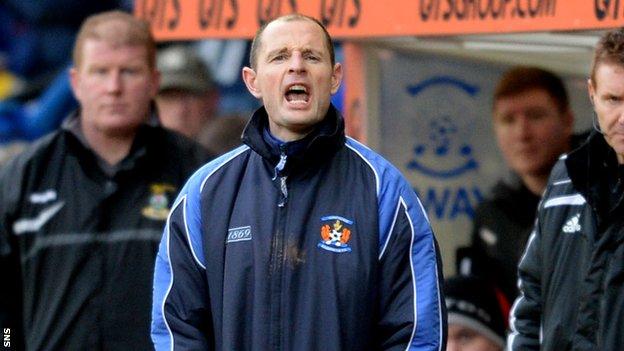 Kilmarnock manager Allan Johnston believes the mixture of youth and experience in his squad helped them beat Inverness 2-0 at Rugby Park.

A goal in either half from Lee Ashcroft and Kris Boyd ensured the victory, and Johnston hopes to maintain momentum as the Premiership split nears.

"Some of the young lads who have come into the team have done exceptionally well," he said.

"With that blend of experience, the boys are playing really well."

And he added: "There's still a lot of massive games to come between now and the split - we need to make sure in our home games that we're picking up results, and that's what we'll continue to do."

Ashcroft's 16th-minute header gave the home side the lead when Sammy Clingan flighted in a free-kick for the 20-year-old to nod home. Then top scorer Boyd sealed the victory in the second period with a fine solo effort.

"It was a really good team performance from start to finish," explained Johnston.

"Since we actually picked up our first win of the season, the form has been good.

"Last week, maybe the only criticism we had was in the first half we never started well, but we started really well today - you could see the difference, and it was important to get the first goal."

However, Johnston was keen to play down any immediate reports that Eremenko had already agreed a deal.

"I don't think it suggests he's going to join the club, but we're interested in bringing in as many quality players as we can, and he's definitely a quality player," said Johnston.

"So, time will tell if we can manage to bring him in."