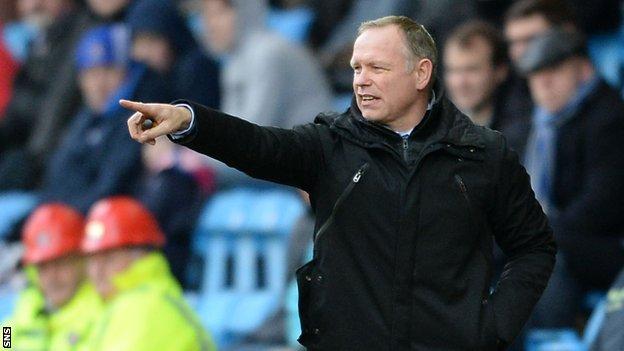 Inverness manager John Hughes felt his players were trying too much too soon as they crumbled to a 2-0 defeat by Kilmarnock at Rugby Park.

Kris Boyd's second-half strike added to Lee Ashcroft's opener as the Highland outfit struggled to gain a foothold in the match.

"We need to come back off it and make sure we're doing the fundamental side of the game right."

Ashcroft opened the scoring for Killie with a header in the 16th minute from Sammy Clingan's free-kick, then Boyd found the net to seal victory.

Even in defeat, I think we'll be the better team for the lesson today

Hughes said his players lacked a "killer edge" in the match, which cost them dearly.

"I felt our passing was good, although we were a bit sloppy in the first half," said Hughes.

"We lacked that killer pass. We never created too many chances, and then we lost the goal from a set play.

"That allowed Kilmarnock to sit behind it, and we struggled to break it down.

"As the game went on, they were having the better chances on the break.

"We huffed and puffed, we had a few chances of our own - but it wasn't meant to be. we're better than that.

"We had a great standard last week, and we fell below it - it's very disappointing."

Despite the defeat, Hughes maintains his determination to restore the club's form in the second half of the season and insists he will learn from the defeat.

"I want to have a good go at it, but there's no point in throwing everyone up front with the long ball - Kilmarnock know when it's coming.

"It just wasn't to be. Even in defeat, I think we'll be the better team for the lesson today."