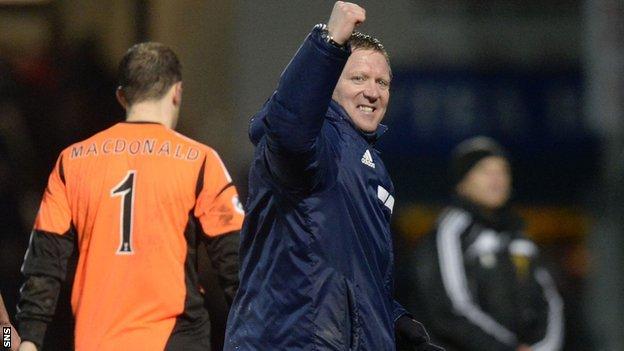 Manager Gary Locke believes moving onto a positive points tally gives Hearts a huge mental boost for the rest of the season.

Scott Robinson's 80th-minute strike gave the Edinburgh side a 2-1 win away to Ross County.

"It's a great thing psychologically for us," Locke told BBC Radio Scotland.

"All season you look at the league table and you're minus [points], so the fact that we're on two points is great."

Hearts have now amassed 17 points since starting the campaign on -15 penalty for entering administration.

We'll not get carried away, it's only one win

Prior to this win, their last victory came in November and they still trail second-bottom side Partick Thistle by 19 points at the foot of the Premiership.

"We'll not get carried away, it's only one win," said Locke, a former Hearts player.

"We've got a big week ahead with another important game on Wednesday [against St Mirren]."

Hearts began the game brightly at Victoria Park and took a deserved lead when striker Callum Paterson stabbed in from close range.

But they were pegged back when County's on-loan Blackburn defender Yann Songo'o powerfully headed an equaliser.

And Robinson's winner for the visitors was the midfielder's first goal this season.

"It was a fantastic performance for 90 minutes," said Locke, whose side ended Ross County's unbeaten start to 2014.

"They had a little spell just after half-time but I felt we dominated most of the game. In the first half we should've been three or four goals up.

"Delighted for the boys because they've worked really hard all season and they've never really got the rewards they deserved, but today it was a fantastic performance and a fantastic result.

"The character's been there for everyone to see all season. One thing about these boys is that they never give up."

"Every game it's very important that we show our appreciation to the fans because if it wasn't for them we wouldn't be standing here right now," Locke added.