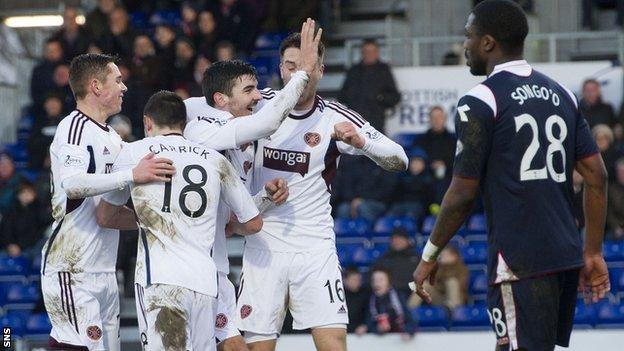 Ross County manager Derek Adams was left ruing his side's form against the Premiership's bottom six after a 2-1 defeat by Hearts.

Wins over Inverness, St Johnstone and Dundee United had helped County go unbeaten in 2014 before this loss in Dingwall.

"We won three games against the top six sides and drew one against Partick Thistle," said Adams.

Today we can't take anything away from Hearts, they deserved to win the match

"We didn't look like the side that's played the last four games," Adams told BBC Scotland.

"Today's a game we should be winning, with the calibre of player we have in the side.

"We haven't done that and too many of us had an off game. But I can't be too critical of them because they've been on a fabulous run since the New Year.

"Hearts have been in a difficult run of results and had a difficult year and now they've managed to get this win. They were going to win at some point and obviously today was the day.

"Today we can't take anything away from Hearts, they deserved to win the match."