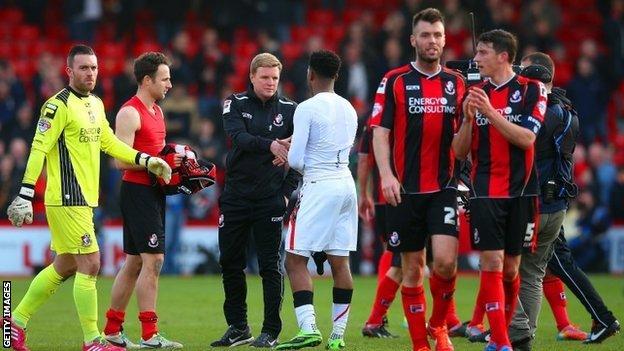 Bournemouth manager Eddie Howe praised his side after a "brave" performance against Liverpool in the FA Cup.

Howe's side were in the fourth round.

However, Bournemouth - who were playing in League One last season - caused their opponents problems throughout.

"I'm very proud of the players as individually they have had to work very hard to produce that level of performance. I was really happy with everyone today," Howe told BBC Sport.

"Hopefully everyone leaves here in a positive frame of mind from a Bournemouth perspective."

Goals from Victor Moses and Daniel Sturridge sealed Liverpool's victory but Howe says he hopes his side have proved their ability.

"What we wanted was a result first and foremost but also a performance where everyone goes away thinking 'what a good football team Bournemouth are'," he said,

"That was our challenge and hopefully we did that. We didn't get the result to match the performance but I don't think it was far away.

"We are trying to build a club that is built on possession so this was a really good chance for us to go toe to toe with a really good football team, one of the best in the country, and see if we could beat them footballing-wise."

Bournemouth's manager also paid tribute to his side for sticking to their principles and hopes it can help kick start their league form, with them sitting 16th in the league.

"The players have been able to test themselves on the biggest stage and games like this can only help our mentality," he said. "This is the same group of players who were in League One last season and now they are exposed to sell-outs and much bigger games and this is all part of their learning curve.

"We did not freeze on the occasion, it would have been easy to go down the route of smashing long balls and not wanting the ball but they were brave and I thought we were very good technically in tight situations against very athletic players.

"If you work hard and live your life right you will get the rewards and the challenge now is to go onto the next level and produce that level of performance week in, week out."

"Bournemouth are a very good side, so credit to them," Rodgers said.

"The courage the Bournemouth players showed today was fantastic to get on the ball, create chances and openings and they have got better and better.

"This is a wonderful club who have a tradition of playing good football and coaches like Eddie Howe will take the game forward in this country."