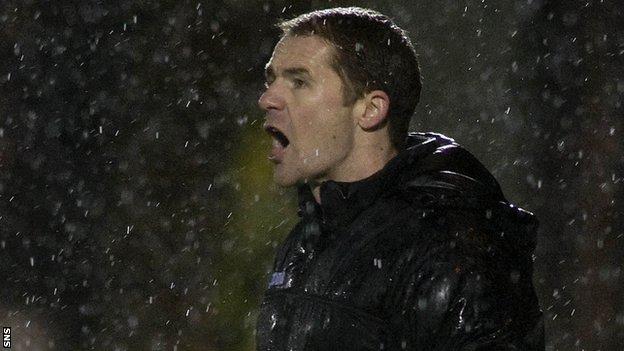 Partick Thistle manager Alan Archibald felt the conditions played a part in the 0-0 draw with St Mirren in the Scottish Premiership.

In a game of few chances, Archibald thought the fans were at least shown some exciting football amidst the rain.

"It became a bit of a mockery with the wind and the rain," said Archibald.

"Although the first half was entertaining for the fans, even though it was raining, I thought we entertained them."

Paul McGowan came closest to breaking the deadlock at St Mirren Park with a shot that rattled the Thistle woodwork.

Although the first half was entertaining for the fans, even though it was raining, I thought we entertained them

The best chance of the match fell to Steven Thompson, who passed up an opportunity to score with a poor touch in front of goal.

"I thought we got to the byline on numerous occasions, and it just wasn't there for us," said Archibald.

"That was down to good defending to be honest. I thought it went either way.

"The second half was a bit of a lottery, I think it was a bit too much end-to-end for my liking.

"I thought we were better in the first half, without putting ourselves under pressure in too many areas. "

Saint's Jason Naismith had a crude lunge on Kallum Higginbotham as the Englishman tried to break into the St Mirren box.

The winger had to be stretchered off with what looked like a nasty knee injury, being replaced by Steven Lawless, and Archibald admitted he could be out for a number of weeks.

"Kallum has a gash across his knee, he's had about eight stitches," said Archibald.

"It just opened up, I think the boy's studs caught him in the tackle and we lost a couple of others as well.

"It's an awkward one, because it's right on the joint and every time he bends, it'll probably open up."