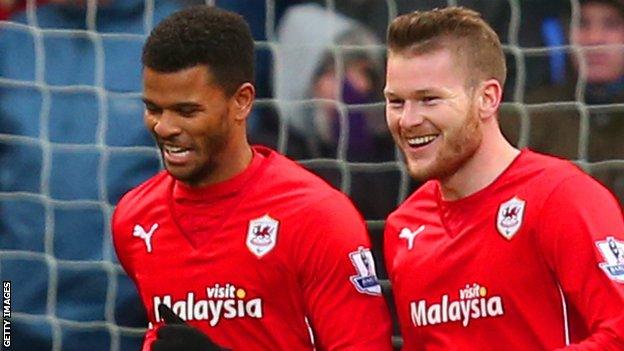 Cardiff are through to the fifth round after Fraizer Campbell's goal secured a 1-0 victory at Bolton Wanderers.

Midfielder Gunnarsson says the focus must now be on securing vital league points, starting at Manchester United on Tuesday.

"The FA Cup might be one where we may even nick a trophy. But now all our focus is on Man Utd," he said.

Our performances have been getting better but we need a result

"We're rock bottom and we need to get a win. We need to get the three points and to start with that on Tuesday would be brilliant.

"It's going to be a hard game, we know that. They're trying to obviously lift themselves but we're looking forward to it.

"But then again we've got some games coming at home and hopefully that will be an advantage for us."

"I can imagine he'll be looking forward to that but I think his main focus is obviously getting the three points," Gunnarsson added.

Despite their progress in the FA Cup, Cardiff have yet to win in the league since Solskjaer succeeded Malky Mackay.

But Gunnarsson believes Cardiff are capable of surviving in the Premier League and can take plenty of positives from recent displays including the FA Cup win at Bolton.

"It's always good to get a win - there's not been many lately," the Iceland international said.

"Our performances have been getting better but we need a result."