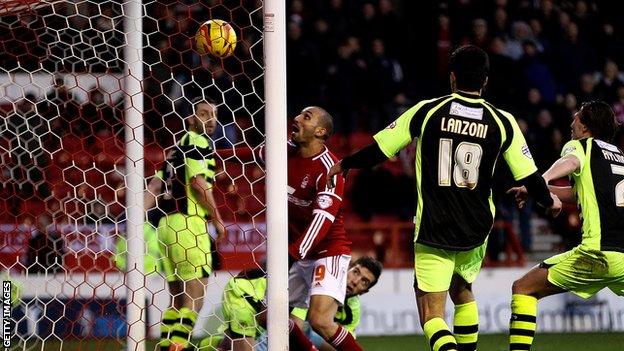 Rafik Djebbour scored on his debut as Nottingham Forest strengthened their promotion hopes with victory over Championship strugglers Yeovil.

Forest led early on when Yeovil's Byron Webster turned Jamie Paterson's shot into his own net.

Kieffer Moore equalised with a header but Simon Cox got Forest's second from close range before Djebbour struck.

The hosts went into the game on the back of an impressive run of form, with Billy Davies's side unbeaten in their previous 12 games in all competitions.

Yeovil, in contrast, had lost five of their previous six Championship games, a run of form that has seen them drop to the bottom of the table.

Unsurprisingly, it was the home side who dominated from the outset as Paterson saw a fourth-minute shot blocked, before Andy Reid skewed an effort wide.

Yeovil struggled to deal with the pace of Forest's attacks, and it was no surprise the hosts went in front through a swift break.

Henri Lansbury crossed for Paterson, whose shot was helped over the line by defender Webster as he tried to clear.

To Yeovil's credit, they responded well and equalised nine minutes later as Jamie McAllister crossed from the left and Moore jumped highest to head home.

Forest had struggled to forge opportunities after that setback, but retook the lead just before the break when Cox slotted in Jamie Mackie's low cross from four yards.

The home side were more effective in attack at the start of the second half, with Lansbury's drive tipped round the post by goalkeeper Marek Stech before Paterson's precise shot hit the woodwork.

And, just as Yeovil started to get on top, striker Djebbour made the points safe when he prodded in from a yard out following a goalmouth scramble.

"It was a brilliant result and we're delighted to have come through a difficult game.

"We created quite a few chances, especially in the first 10-15 minutes and I thought we should have been further away.

"We're not talking about promotion, we really are taking it one game at a time and our biggest focus now is Preston on Wednesday in the FA Cup."

"Nobody likes losing matches, but we have to be realistic. We started poorly and gave away a soft goal. It took us a while to get going, but once we started passing it I thought we had them worried.

"In the second half we had a couple of chances and until they got their third goal I thought we had them on the ropes at 2-1 down.

"We've definitely not given up and heads will not drop just yet. All we've got to do is keep learning and the boys have got to believe in themselves."