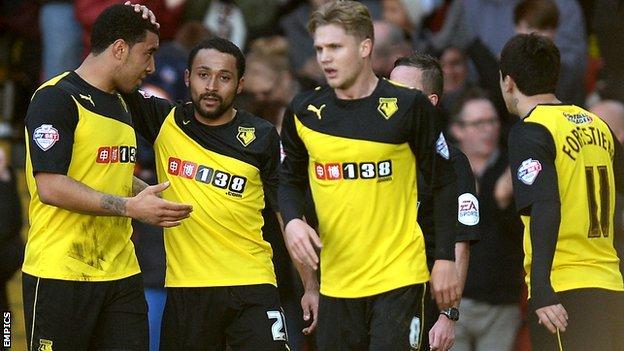 Watford earned only their second win in 16 Championship games with victory over play-off hopefuls Brighton.

The home side went ahead courtesy of Ikechi Anya's angled strike.

But Fernando Forestieri sealed a rare Hornets win when he capitalised on Gordon Greer's poor backpass, rounded keeper Tomasz Kuszczak and slotted in.

This was only Watford's second win in the Championship since 19 October. The other was a 4-0 Boxing Day victory over Millwall in manager Giuseppe Sannino's first home game in charge

Defeat left Brighton seven points off a play-off spot in ninth, and they could have little complaint.

Watford took the lead with their first attempt of note in the 13th minute.

Alexander Merkel fed Anya on the left of the penalty area and, after teasing the Seagulls defence, the Scotland international hit a low shot across Kuszczak and into the far corner of the net.

The substitute received the ball on the left of the penalty area and unleashed a left-footed shot that flew past helpless Hornets goalkeeper Manuel Almunia and rebounded off the underside of the crossbar.

The home side doubled their advantage in the 60th minute.

Good pressing by Merkel forced Greer into an under-hit backpass and Forestieri latched on to the loose ball to score.

The Seagulls thought they had pulled a goal back when Leonardo Ulloa headed a free-kick from the right past Almunia, but it was disallowed for offside.

"I'm happy for my team because we came from three games where we didn't get what we deserved.

"I knew that Brighton before this game were the best team in terms of goals conceded away from home and if we score two goals it's because the pressing was very good.

"But I was also impressed by the desire of my lads and the effort that we were able to put into the game - we worked our socks off."

"The first goal did come slightly against the run of play but they took that, it kind of knocked the wind out of us a little bit and we huffed and puffed without really taking the game to them.

"Then obviously the second goal came at a bad time as well and to rub salt into the wounds with the disallowed goal, that might have come at a time when we might have kicked on and got something out of the game.

"All round, we're quite frustrated really."