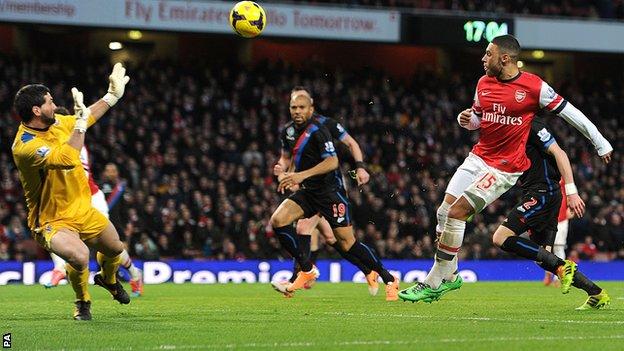 Arsenal went back top of the Premier League with victory over a dogged Crystal Palace at Emirates Stadium.

Following a goalless first half, Alex Oxlade-Chamberlain got his first of the season when he finished calmly after intelligent play from Santi Cazorla.

Palace could have had an equaliser but Cameron Jerome's diving header was excellently saved by Wojciech Szczesny.

Oxlade-Chamberlain then doubled his tally for the season after he combined with team-mate Olivier Giroud.

The result takes Arsenal back above Manchester City, although Manuel Pellegrini's side can in turn regain top spot if they beat Chelsea at Etihad Stadium on Monday.

But Arsenal, bidding to win the title for the first time since 2003-04, gained a vital three points to move two clear with Liverpool and Manchester United the opponents in their next two league games.

Oxlade-Chamberlain's last goal before this match came at the Maracana last June as England drew 2-2 with Brazil in Rio.

But the 20-year-old, who missed four months of the season with a knee injury, was the difference between Arsenal and Palace, and could yet return to Brazil in the summer as part of Roy Hodgson's World Cup squad.

It had looked like being a disappointing afternoon for Gunners boss Arsene Wenger as Tony Pulis's Palace appeared content to play for a point.

The defensive tactics worked in the opening half as a well-organised away side frustrated the hosts and sucked the entertainment out of the game.

Palace's Argentine keeper Julian Speroni blocked a low shot from Nacho Monreal and pushed out Mesut Ozil's floated free-kick, which had missed everyone and was heading towards the far corner of the net.

The Eagles' only first-half chance fell to Marouane Chamakh, but the Moroccan, who scored 14 goals in 67 appearances in just over three years with the Gunners, wasted the opportunity with a heavy touch.

It was a game to forget for the striker, who was also at fault for Arsenal's first goal, which came less than two minutes after the restart.

He failed to track Oxlade-Chamberlain and the unmarked midfielder, making a first Premier League start since the opening-day 3-1 defeat by Aston Villa, collected Cazorla's ball over the defence and shot past Speroni.

Palace have scored the fewest goals in the division - 15 in 24 games now - but might have been level within five minutes.

Yannick Bolasie's excellent cross from the left wing found Jerome, whose header from inside the six-yard box was blocked by the Arsenal goalkeeper.

That proved Palace's one chance of getting back into the game and Oxlade-Chamberlain grabbed his second on 73 minutes when he played a one-two with Olivier Giroud, outpaced the Palace defence and shot home to secure the win.

"It was a great day for [Alex Oxlade-Chamberlain]. He was out for a long, long time and we needed to be patient to get him back to full fitness. He had a great game and scored two great goals.

"Crystal Palace were well organised and united in their desire to do the job. They are a physically strong side and we knew we had to take advantage of our chances, and we did.

"I believe Chamberlain can play out wide or centrally. Certainly in a few years he will be a central midfielder. He has that surge of power which is so vital in the game today. He is also a good finisher and hopefully these two goals will give him some confidence as he is not always sure he is a good goalscorer."

"It's never nice to be injured for five months and it was hard, especially with the boys doing well.

"Being out for a long time is mentally tough, but you have to stay positive and you think that when you come back you will be stronger - that's what keeps you motivated.

"I want to improve my goalscoring record. The manager tells me I need to improve and this was a step in the right direction."

"Alex Oxlade-Chamberlain has run off the back of Marouane Chamakh for the first goal, but Joel Ward's body shape and position was poor. He has held his hands up. If you switch off for a couple of seconds, it's a goal.

"We seemed pretty comfortable and we had a great chance ourselves and that would have changed the game.

"Arsenal are a very good side and move the ball very well. Our players have done a remarkable job since I've been here. We've played all the top teams away from home, so we have got that out of the way and now it is up to us."