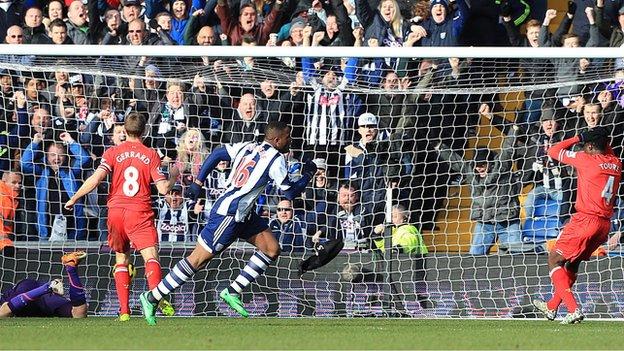 Liverpool defender Kolo Toure gifted West Brom an equaliser as the Reds missed a chance to tighten their grip on fourth place in the Premier League.

Daniel Sturridge tapped in a Luis Suarez cross to put the visitors ahead.

Albion picked up the pace after the break and Gareth McAuley had a powerful header palmed away by Simon Mignolet.

But West Brom were rewarded for their efforts when Toure's poor pass found Baggies striker Victor Anichebe and he drilled in a low shot.

The setback means Liverpool have earned 16 points from 36 on their travels so far this season and the result will come as a relief to their rivals for the last Champions League place.

Everton, who lost heavily to the Reds on Tuesday, beat Aston Villa on Saturday and are now only two points behind their neighbours, while Brendan Rodgers' side failed to capitalise on slip-ups for Tottenham, who drew at Hull, and Manchester United, who were beaten at Stoke.

Only goal difference was keeping West Brom out of the bottom three before the game but an improved second-half performance will give them hope of securing Premier League survival.

Rodgers began his Liverpool tenure with a 3-0 defeat at The Hawthorns in August 2012 but, following a tame opening, his side's prospects looked brighter this time round.

Raheem Sterling was set clear on the right and, after his cross was blocked, he passed to Suarez, who guided a ball to the far post where Sturridge steered it home from two yards for his 14th league goal of the season.

"Kolo Toure has had one of the poorest games I remember him having. He has had a stinker. Liverpool were in control but a horrible mistake by Toure gave West Brom the equaliser. A good point for West Brom in their fight for survival. A victory that got away for Liverpool."

Toure had a chance to extend the lead, but failed to connect from close range after his initial header from a Philippe Coutinho corner was blocked.

A Zoltan Gera shot that went wide was the hosts' best moment of an opening half in which they also lost centre-back Jonas Olsson to injury.

But Liverpool had kept only one clean sheet in 10 away games prior to this match and as the Baggies started to press their visitors higher up the pitch in the second half, the chances began to arrive.

Skipper Chris Brunt's angled shot at the far post was blocked by right-back Jon Flanagan before McAuley had his towering header smartly palmed away by Mignolet.

Liverpool badly needed the cushion of a second goal and almost had it when Suarez outmuscled Diego Lugano but the Uruguayan's shot was saved by keeper Ben Foster.

The failure was duly punished when Toure played a square ball straight to former Everton forward Anichebe and he took advantage of the gift to finish clinically past Mignolet.

Foster saved at Sturridge's feet as Liverpool tried to engineer a winner, but it was West Brom who ended the game the stronger.

"At half-time we needed to speak because we forgot to press Steven Gerrard and Jordan Henderson as well as their centre-backs.

"In the second half it was better. The goal came after we pressed high up the pitch.

"He (Anichebe) is a good player. The team now is good. The second half was good and this is the way."

"[Toure] shouldn't have received the ball in the first place.

"I've said to the team that we are in the position that we are because over the last 18 months we have shown the courage and bravery to play football, and part of that is to build the game from the back.

"He is an experienced guy so he knows it was a mistake. He is devastated because he is a real conscientious guy. There is no blame for any of them.

"Unfortunately, it has cost us two points but, hopefully, we will see it as a point gained at the end of the season."