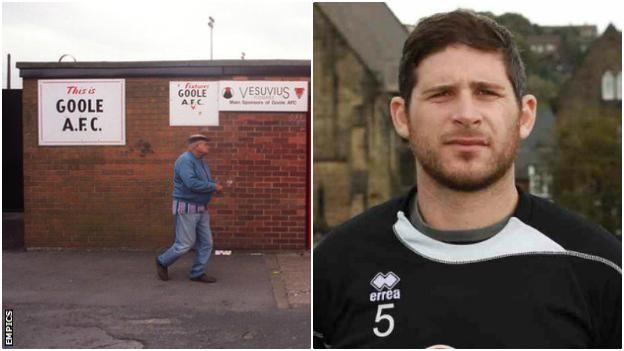 A non-league player has been sacked by his club for trying to punch a fan - 19 years to the day after Eric Cantona's famous kung-fu kick on a supporter.

He then reacted angrily to chanting from away fans and aimed a punch at one after initially being held back by staff, including Goole assistant Curtis Woodhouse, the professional boxer and ex-Premier League footballer.

The East Yorkshire club sacked the 30-year-old defender immediately after the match, which they lost 3-0.

The Football Association has said it will look into the incident.

I'm gutted for him, he's a nice kid but you can't go off like that, he knows that. I don't condone or make excuses for today, it was wrong on many levels

A Coalville fan told BBC 606: "The Goole captain has just gone ballistic. He got sent off, it was a bad tackle. I think he knew he was going to be sent off. There was a melee with the players.

"He threw the captain's armband on the floor. Coalville fans started singing at him - nothing malicious in what they were singing. He threw open the black gate and ran up and tried to hit one of our fans. Luckily the punch missed.

"The Goole officials, fair play, are trying to stop him."

Woodhouse said on Twitter: "I'm gutted for him, he's a nice kid but you can't go off like that, he knows that. I don't condone or make excuses for today, it was wrong on many levels."

A club statement read: "After the deplorable incident at today's home game against Coalville Town, we can confirm that the player responsible has been released by the club.

"The club acted quickly and decisively and released the player with immediate effect and as such the player in question will never play for our football club again."

In 1995, Manchester United's Cantona lashed out at a Crystal Palace fan after being sent off, claiming the supporter shouted racial insults and threw a missile at him. He was banned from football for nine months and fined £20,000.