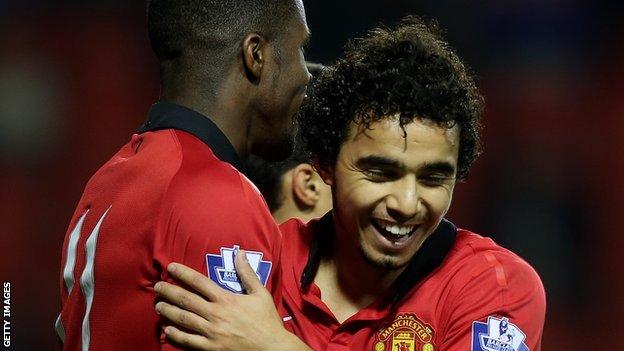 Zaha, 21, will join on loan until the end of the season, with Jones, 29, poised to sign in a swap deal with fellow striker Peter Odemwingie.

Fabio, 23, is likely to join on a permanent deal, with all three players having had medicals on Sunday.

Cardiff have made three signings since Ole Gunnar Solskjaer became manager; forward Jo Inge Berget and midfielders Magnus Wolff Eikrem and Mats Moller Daehli having all played under the manager for Molde in Norway

He has made just four appearances, with his only two Premier League outings coming as a substitute.

United team-mate Fabio has scored three times in 56 games since joining from Fluminense in July 2008.

Fabio can play at full-back or in midfield and is the twin brother of United's Rafael Da Silva.

He will strengthen a Cardiff team who are managed by former United striker Ole Gunnar Solskjaer and sit bottom of the table, one point from safety.

Stoke's Jones will leave the Potters just a week after being dropped for the 1-0 defeat by Crystal Palace following his refusal to play against Liverpool six days before.

The Trinidad & Tobago international first joined Stoke on loan from Southampton in 2005.

He then became the Potters' record signing when he arrived in August 2010 from Sunderland for £8m and went on to score 26 goals in 115 appearances in his second spell with the club.