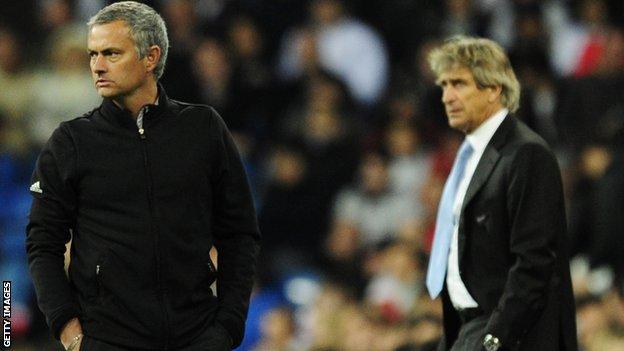 Manchester City will play Chelsea, while Arsenal are at home to Liverpool in the FA Cup fifth round.

Everton boss Roberto Martinez will face one of his former clubs, Swansea, while Sunderland will host Southampton in the the other all-Premier League tie.

The games will be played on the weekend of 15-16 February.

"The big one for me was first out - Manchester City v Chelsea. I am delighted for Swansea getting Everton, as they have a great respect for the job Toffees boss Roberto Martinez did in Wales.

"It also gives the likes of Brighton and Sheffield Wednesday a chance to go really far in the competition."

The round's other tie sees Sheffield United or Fulham host Nottingham Forest or Preston - the only two ties that need fourth-round replays.

It means leaders Arsenal are now scheduled to play Liverpool and Manchester United in the league, the Reds again in the FA Cup and Bayern Munich in the Champions League in the space of 12 days.

Second-placed Manchester City's game with Chelsea, who are third, will take place either within four days of hosting Barcelona in the Champions League.

Of the trip to the Etihad, Chelsea boss Jose Mourinho told ITV: "No problem. If you want to be the best, you have to play against the best, so it's good for us. One team is the end product. One team needs to improve and has a long way to go. Good experience, good game, big game."

There are only two fixtures guaranteed to be between Premier League and Football League sides, with Brighton hosting Hull and defending champions Wigan visiting Ole Gunnar Solskjaer's Cardiff.

Sheffield Wednesday play Charlton Athletic with one of the Championship relegation rivals guaranteed a quarter-final spot.

Check out the full FA Cup fifth round draw and have your say on the BBC Sport Facebook page.