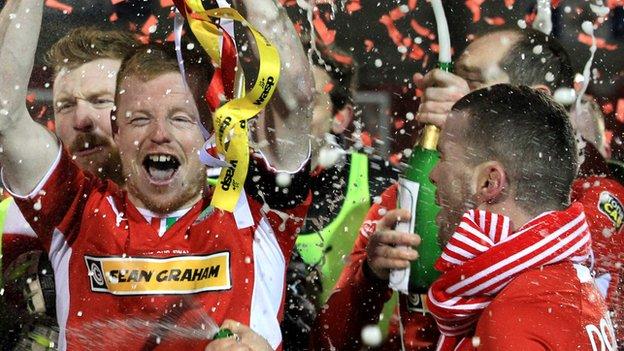 The Reds' title charge faltered last week when they lost to Portadown, but McMullan feels the cup final triumph could prove a vital catalyst.

"Last season we won this cup and went on to win the league," he said.

"That may be the lift we needed. We wanted to show to the fans that we still have the fight to be at the top."

McMullan added: "It is a kick along for us, just like it was last year, and hopefully it brings us to another title."

Having been knocked out of the Irish Cup by Coleraine four days before the League Cup final, Cliftonville's target is to hold on to the two trophies they captured last season.

The champions' next match sees them up against leaders Linfield in a tantalising top-two clash at Solitude.

Linfield would have been seven points clear if they had beaten bottom club Ards at home on Friday night, but they were held to a 3-3 draw at Windsor Park.

That means victory on Saturday would see Cliftonville close the gap on David Jeffrey's Blues to just two points.