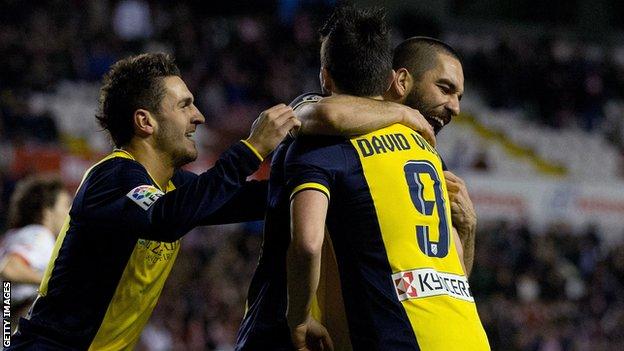 Atletico Madrid put their La Liga title charge back on track with a comfortable derby win against Rayo Vallecano.

Arda Turan made it 2-0 with a tap in, but Viera's deflected strike briefly gave Rayo hope.

Turan turned in Atletico's third at the far post, and an own goal by Saul made it 4-1 before Joaquin Larrivey's late consolation.

Diego Simeone's side had drawn their previous two games against Sevilla and Barcelona.

"It was important to win after two draws," said Atletico striker Villa.

"We had to win, that's the important thing, going ahead game by game. We can't think about the rest."

Atletico's first win since 4 January keeps the former leaders in a strong position as they challenge Barcelona and Real Madrid for the title.

They are second in the standings with 54 points, level with leaders Barcelona but behind on goal difference. Real are one point and one place below their city rivals.

A 15th defeat of the season leaves Madrid-based Rayo still rooted in the relegation zone, five points from safety.