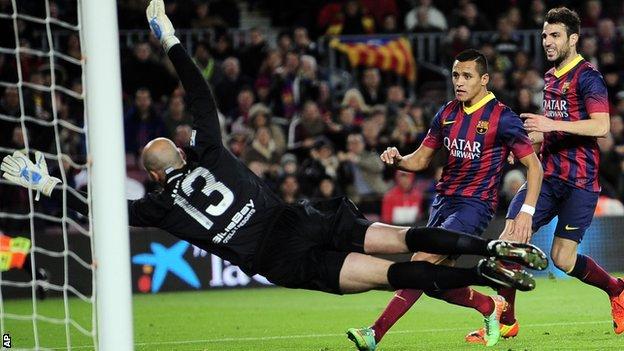 Lionel Messi continued his league goalscoring drought as Barcelona went back top of La Liga with a comfortable home win over struggling Malaga.

But Messi, who has not netted in the Spanish top-flight since 28 September, played a key role as Barca moved back above Atletico Madrid and Real Madrid.

After Gerard Pique volleyed in a first-half opener, the Argentine picked out Pedro to fire into the bottom corner.

And he started the move that saw Alexis Sanchez tap in Pedro's cross.

Messi was playing his third La Liga game since returning from a two-month absence with a hamstring injury and, despite spurning a golden first-half chance to beat Malaga keeper Willy Caballero, showed glimpses of returning to the peak of his powers.

Rosell, 49, quit the Catalan giants after a Spanish court decided to investigate the alleged misappropriation of funds in the £48.6m summer signing of Brazil star Neymar, who did not play against Malaga because of an ankle injury.

The routine victory against an away side hovering above the relegation zone means the defending champions lead the Spanish top-flight for a 59th consecutive week.

Gerardo Martino's men move back above Atletico, who beat Rayo Vallecano earlier on Sunday, courtesy of their superior goal difference.

Third-placed Real are one point behind the pair after extending their unbeaten run to 11 matches with Saturday's 2-0 home win against Granada.