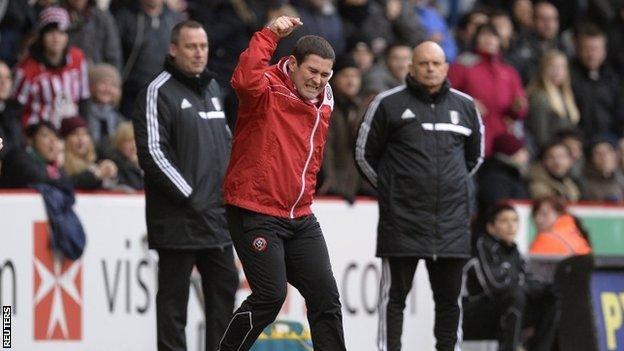 Sheffield United boss Nigel Clough said his side felt a "sense of injustice" after their 1-1 draw with Fulham in the FA Cup fourth round on Sunday.

Blades captain Michael Doyle was sent off for an off-the ball clash with Chris David, while Ryan Flynn had a strong shout for a penalty rejected.

"The crowd responded because there was a sense of injustice - from us as well - to some decisions," said Clough.

"There was definite contact on Ryan Flynn in the area."

"Fulham had a few decent chances, but Sheffield United thoroughly deserved a replay. The sending off changed the game, as Fulham started to believe.

"Sheffield United worked very hard, as it was tough conditions to play with 10 men. They defended strongly."

Clough's side took a first-half lead through Chris Porter but Fulham came back into the game after Doyle was sent off for the League One side early in the second half.

United still threatened on the break and had their penalty appeals after Flynn went down under a challenge by Aaron Hughes waved away before Hugo Rodallega equalised for the Cottagers.

"I thought there was more contact when Ryan Flynn went down for the penalty than there was for the sending-off," added Clough.

"The red card changed the game. I haven't seen it, but I just asked Michael if he touched him.

"He said yes, there was contact, but he didn't think there was sufficient contact for a sending-off.

"If we had kept 11 men on the field then we would have won it, but even with 10 men we looked dangerous."

It was referee Andre Marriner's decision to reject United's penalty appeal that incensed Clough and led to Marriner speaking to the Blades boss.

"It was aimed at everybody on the bench, not an individual thing," Clough explained. "We were just a bit irate with the fourth official - too much so - but that is where the passion takes over.

"He just said to me to calm everybody down, which is a great way of doing it rather than sending anybody to the stands."

The tie will now go to a replay at Craven Cottage and Clough feels his side can win to set up a home meeting with either Nottingham Forest or Preston in the next round.

The Blades, who are in the League One relegation zone, beat another Premier League side, Aston Villa, on their own ground in round three.

"We have matched Fulham and now we are looking forward to going to Craven Cottage," Clough said.

"We got a result at Villa and there is a belief that we can do it again."