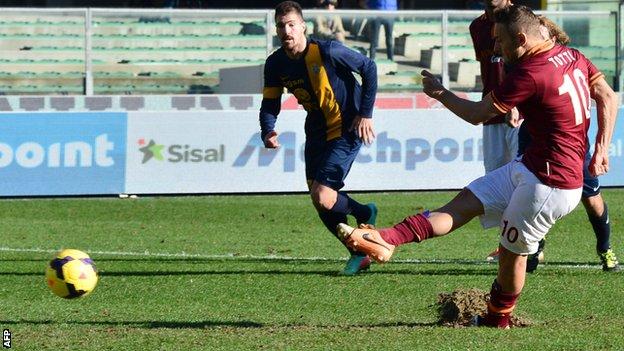 Second-placed Roma closed the gap on Serie A leaders Juventus to six points with a routine win at Verona.

But Roma retook the lead when Gervinho struck after jinking past several home defenders, before Francesco Totti capped the win with a late penalty.

It was an important win for Rudi Garcia's men as they looked to take advantage of Juventus's slip-up at Roma's cross-city rivals Lazio on Saturday.

The defending champions battled back to earn a 1-1 draw in Rome, after seeing goalkeeper Gianluigi Buffon sent off midway through the first half.

Roma, who were beaten 3-0 at Juve earlier this month, started positively as they sensed an opportunity to reinvigorate their fading challenge for the Scudetto.

But, after Mattia Destro and Ljajic both missed early chances, they had to be patient until the Serbia international converted from close range.

Verona equalised when Hallfredsson profited from a strong burst by team-mate Juan Iturbe, before former Arsenal forward Gervinho continued his impressive form with a smart strike.

And Roma sealed the win after they were awarded a debatable spot-kick for a foul on Greece defender Vasilis Torosidis.

Veteran striker Totti, who was introduced as 76th-minute substitute, converted his 232nd goal for Roma to secure a third consecutive win since their defeat at Juventus.