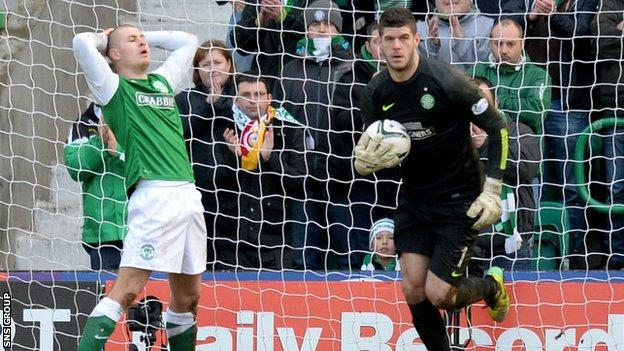 Celtic ran out 4-0 winners but needed an amazing stop from Forster to deny Sam Stanton an equaliser.

"I thought it was in," Lennon told BBC Radio Scotland. "He's one of the only types of keeper who can make those saves.

"He's so big and has great presence but he has great agility as well."

Forster pushed away two good strikes from Abdellah Zoubir before getting a hand to Stanton's powerful drive from the edge of the penalty box with the score at 1-0.

"He's got a huge career ahead of him and he's made giant strides here," Lennon continued on the England international.

"He really earned his corn today."

Lennon was delighted to come through a sticky patch in the second half when Forster was at his best.

"To come here and win 4-0 probably flatters us but I always felt we would win the game," he explained.

"We had to withstand a lot of pressure for 15-20 minutes and my goalkeeper made a couple of great saves.

"It shows we are not going to get everything our own way and we had to dig in.

"We didn't pass the ball as well as we could have during that period but our quality came through.

"Virgil van Dijk scored a world-class free-kick and I was really delighted with Teemu Pukki's contribution in the second half."

The Finland striker blazed in the third goal and won the late penalty, which was converted by Kris Commons - who had opened the scoring on eight minutes.

But the pick of the goals came from Van Dijk, who found the top corner with a lovely set-piece.

The performance at Easter Road stretched Celtic's winning run in the league to 11 games and the champions are yet to taste defeat in defence of their title.

"We might never be in this position again so we need to maximise it and it gives us just that extra incentive for the season," Lennon said of the unbeaten run.

"People think the league has gone now but we have our own targets.

"And you can see that with the focus the players have."