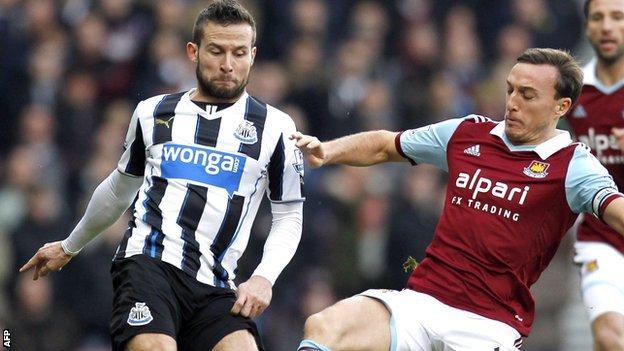 The French champions have a long-standing interest in Cabaye but have had their opening bid rebuffed, reports the Press Association.

PSG boss Laurent Blanc has admitted Cabaye is a target after indicating he wants to sign a midfielder in January.

The 28-year-old refused to play for Newcastle in August after they rejected a £10m offer from Arsenal.

He later apologised to Magpies fans and in September insisted he was "happy" at the Premier League club.

But he has continued to be linked with a move away from St James' Park before the transfer deadline on 31 January.

It is thought Newcastle's asking price for the former Lille player, who joined the Tyneside club for £4.3m in June 2011, is in excess of £20m.

"They are both targets for PSG, they are very technical players who have the same profile. If a midfielder comes this winter I'll be very happy," said the former Manchester United defender.

In December, Arsenal boss Arsene Wenger ruled out another move for Cabaye, insisting he already had enough midfielders.