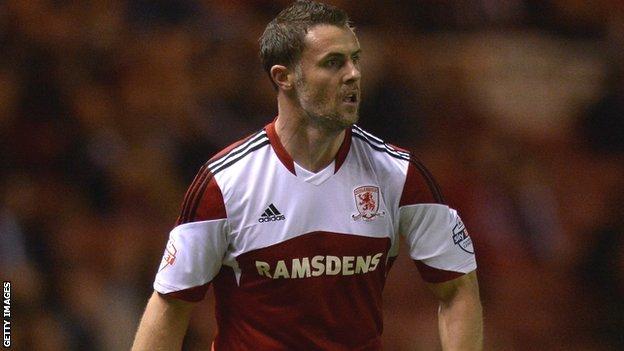 Middlesbrough full-back Frazer Richardson has joined Ipswich on loan until the end of the season, subject to paperwork being completed on Monday.

The 31-year-old has made 11 appearances for Boro this season but has not featured since the 2-1 defeat by Leeds on 23 November.

I was surprised he was available

"I actually tried to sign him for Sunderland when he was at Leeds and I'm delighted to have him here."

Richardson has made more than 300 senior appearances during a career which has also also taken in spells at Leeds, Charlton, Stoke and Southampton.

"[Ex-Saints boss] Nigel Adkins gave him a glowing reference, having had him for two or three seasons at Southampton," added McCarthy.

"What's great about him is he's 31 and a senior pro who's played lots of games, but he's prepared to come to Ipswich without me saying he's guaranteed to be starting - if he gets in and plays well then he stays in the team, that's the rules.

"He's a fit lad and he played against us for Middlesbrough and I thought he played really well so I was surprised he was available."

Richardson, who had been poised for a loan switch to Blackpool until Paul Ince's sacking, will go straight into the Ipswich squad to face former club Leeds on Tuesday,