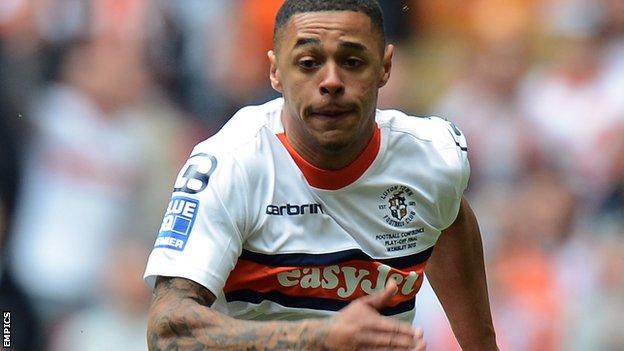 Luton striker Andre Gray says any move away from the club in the January transfer window would be "stupid".

The 22-year-old has been in excellent form for the Hatters, scoring 17 goals including a hat-trick in Saturday's 3-0 win over Nuneaton Town.

Luton are three points clear at the top of the Conference table.

"I already told my agent I don't want to hear anything about January. My main aim is to get us out of this league," he told BBC Three Countries Radio.

"This is where I want to be at the moment. We're top of the league, I'm scoring goals and it can only get better for us - me leaving in January would just be stupid."

Gray, who joined Luton from Hinckley United in March 2012, has formed a potent partnership up front with Paul Benson, who has 11 goals to his name this season.

"I hope there's attention [for Gray] because that means we're doing something right," he said. "But no-one's leaving at the moment, not in this window."

Gray's current deal at Kenilworth Road expires at the end of the 2014-15 season.