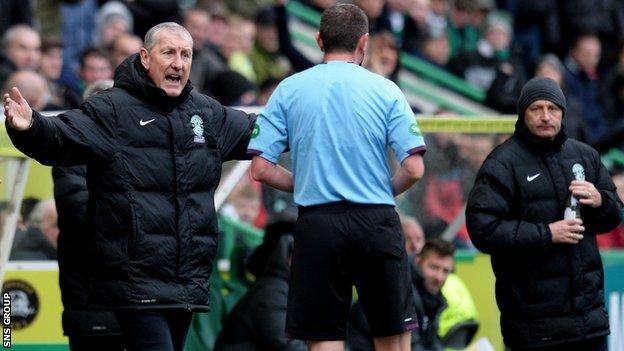 Manager Terry Butcher was pleased with Hibs' display despite a 4-0 home loss to Celtic but was less than impressed by referee Craig Thomson.

The home side had a strong penalty claim waved away when James Collins was tripped by Virgil van Dijk.

"The players are adamant that it was a penalty," Butcher told BBC Scotland.

"I think he (Thomson) said he dived after there was contact. But if there's contact it's a foul whether he's dived or done a pirouette or a hand-stand!"

Butcher was also furious at the award of a free-kick which led to Celtic's second goal following Hibs' best spell in the game.

"I thought we did a lot of things well and we grew into the game in the second half," he added.

"We said at half time that the next goal is crucial and we had good chances. Fraser Forster has made a cracking save from Sam Stanton.

"I thought it's only a matter of time before we score.

"Then the referee gives a free kick against Michael Nelson for a handball.

"What he's said to Michael is that he prevented the ball going through. How he can do that from a yard away, I don't know?

"It's the same referee and player from Aberdeen a couple of weeks ago and the same incident in the box and he doesn't give it.

"And then we had the St Mirren game last week when a player handles the ball in the box not once but twice, which stops the ball going through to my player and no penalty.

"I know it's about interpretation but we have referees ruling on the same situations differently. How can that be? I find it bizarre.

"And of course, Van Dijk curls in a magnificent free kick. That would have deflated me too if I'd been on the pitch, then Celtic run rampant and get two more goals."

But they had Celtic on the ropes for a spell when Forster made two good saves from Abdellah Zoubir and an amazing stop to thwart the impressive Stanton.

Van Dijk's fantastic strike stretched the visitors' lead, with Teemu Pukki knocking in the third goal and Commons tucking away a late penalty.

"We didn't deserve a 4-0 defeat; there's no way we deserved that," continued Butcher.

"I thought we were in the game for a long period of time and showed lots of good things.

"We had some great performances, particularly from the young boys. I didn't know what to expect because this team has never played together before.

"There were far more positives than negatives for us.

"So, we'll regroup; hopefully get in a couple of new players next week, and go again."