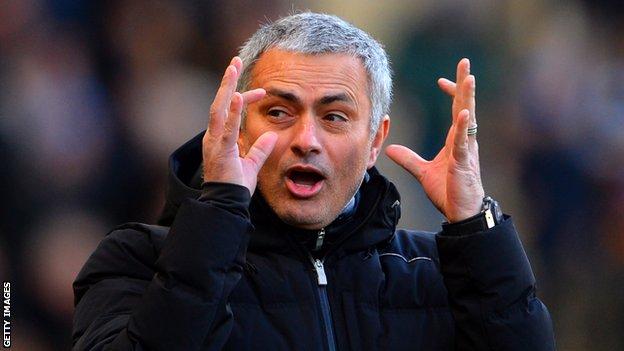 Chelsea manager Jose Mourinho says he is relishing the challenge of an away tie against Manchester City in the fifth round of the FA Cup.

"That's good," Mourinho said after a one-sided victory over the Potters.

"Our priority for the season is to improve. And the best way to improve is difficult things. It is a good thing for us; it's a good draw."

The draw means Chelsea will face Manuel Pellegrini's City, who are on course for the quadruple, twice in the space of two weeks. Mourinho's side travel to City in the Premier League on 3 February.

Chelsea beat City 2-1 when the teams met at Stamford Bridge in October in the Premier League. But City are second in the table, one point and one place ahead of Chelsea.

Pellegrini's side have won each of their 11 league games at the Etihad Stadium this season, scoring 42 times.

Their only home defeat since the Chilean took charge was a 3-1 setback at the hands of European champions Bayern Munich in the Champions League on 2 October.

"We want to play against the best team twice in 15 days," said Mourinho.

Mourinho was pleased with his side's performance against Stoke, despite the narrow scoreline.

"We are playing very well in my opinion," he added.

"We played a very good game and 1-0 does not reflect the quality of our game and the dominance of our game.

"If we lose, we lose against the best and if we don't lose it is fantastic."