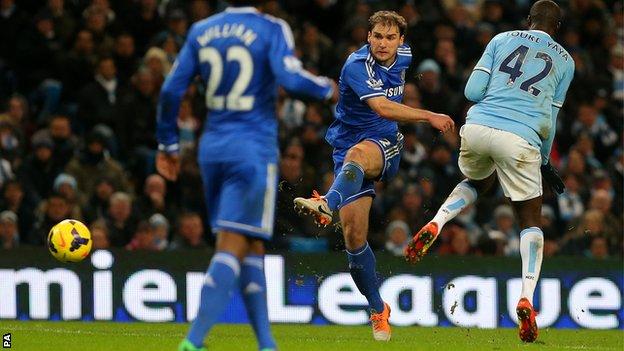 Chelsea condemned Manchester City to a first home Premier League defeat of the season as the title race took its latest twist at Etihad Stadium.

City had won 11 out of 11 at home in the league before Chelsea's visit and knew another one over Jose Mourinho's side would have seen them leapfrog Arsenal and return to the top of the table.

It was the first time City had failed to score in a home league match since November 2010 as the Premier League's most potent attack, with 68 goals, was kept out by the best defence - the visitors have conceded just 20.

This was no smash-and-grab tactical raid by Mourinho either, as his side hit the woodwork three times through Samuel Eto'o, Nemanja Matic and Gary Cahill. They could, and should, have won by a greater margin.

Chelsea, with Eden Hazard magnificent, now stand just two points behind leaders Arsenal and only adrift of City on goal difference, giving the sort of performance that suggests Mourinho's softly-softly approach to their title ambitions may simply be another piece of psychology to relieve pressure on his side.

This was a win that carried the Mourinho trademark of meticulous planning and coaching brilliance that had Chelsea's supporters once again singing the name of "The Special One".

And it was a result that means another turn in the title race, which seemed in City's hands after a series of imperious victories that had seen them compared with the world's finest teams.

The hosts sorely missed the midfield stability normally provided by the injured Fernandinho and the threat offered by Sergio Aguero - but nothing must distract from a Chelsea win of such significance.

Mourinho's tactical approach had been the subject of much speculation - but any notion that he might 'park the bus' to stop City was soon dismissed.

City created the better early chances, with Yaya Toure just off target and David Silva failing to make a good connection with the midfielder's cross, scuffing an effort across the face of goal from eight yards.

Chelsea, however, were set up to hit the hosts on the counter-attack with pace and movement, a ploy that reduced Manuel Pellegrini's side to the sort of anxiety rarely seen at the Etihad this season.

A sign of Chelsea's growing momentum and City's vulnerability came after 26 minutes with a four-on-one break that ended with Joe Hart saving well from Ramires after he was played in by the marauding Willian.

Chelsea's confidence was clear to see and they went ahead six minutes later, Ivanovic thundering in a left-foot strike from the edge of the area after home captain Vincent Kompany made a desperate block on Ramires.

And as City struggled to contain their opponents there was almost a second as Eto'o got onto the end of Hazard's cross only to strike the bar from an angle.

Toure had looked City's best hope and he was just wide with a shot from inside the area but Chelsea's response was to come even closer as Matic's rising drive from 25 yards struck the post.

Pellegrini made a switch as he sent on Stevan Jovetic for Alvaro Negredo, who looked short of full fitness, but his side were fortunate to survive another scare as Cahill once again hit the woodwork with a header.

City had struggled to get anywhere near Chelsea's goal but they finally managed to exert some pressure with 20 minutes left, keeper Petr Cech saving superbly from Silva's free-kick before the Spain star steered Aleksandar Kolarov's cross wide.

Mourinho was infuriated Matija Nastasic was given only a yellow card for pulling back Oscar as he threatened to race clear on the halfway line - but he was celebrating moments later.