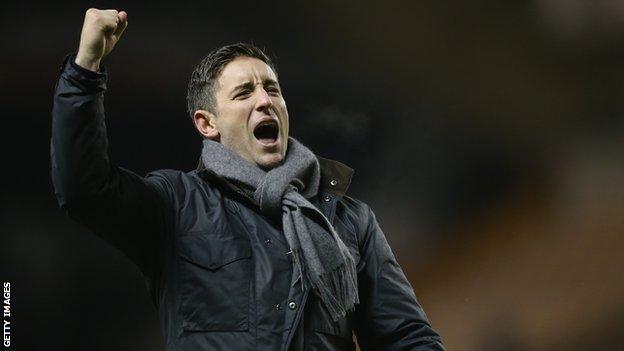 The Latics trailed 3-0 at the break, but Genseric Kusunga's last-minute winner

"We were woeful in the first half. At half-time, we hit rock bottom," Johnson told BBC Radio Manchester.

"Fair play to the lads. What great character, attitude and heart to produce that second-half display."

The 32-year-old, who with the League One club last Thursday, continued: "There were some home truths chucked in there [at half-time], but what was nice was that it came from within the dressing room for the first time that I've seen.

"It was quite aggressive in there and it needed to be because, like I say, that was rock bottom. That's when you see what characters there are."

Johnson, the Football League's youngest manager, made two substitutions in the first half with the score at 2-0 to Posh, replacing Danny Philliskirk and James Dayton with Jonson Clarke-Harris and Connor Brown.

The switch did not work initially, with the visitors extending their lead before the interval, but found the net to get Oldham back in the game and Harkins later netted a penalty to level it at 4-4 before Kusunga's decisive strike.

"You could say I got it wrong with my starting 11. That would be fair to say. Sometimes you've got to hold your hands up and say 'it hasn't worked'.

"We weren't at it in the first half-hour. But I've always felt there are goals in the team and we needed to get rid of the hoodoo. Hopefully after a game like that, that will happen."