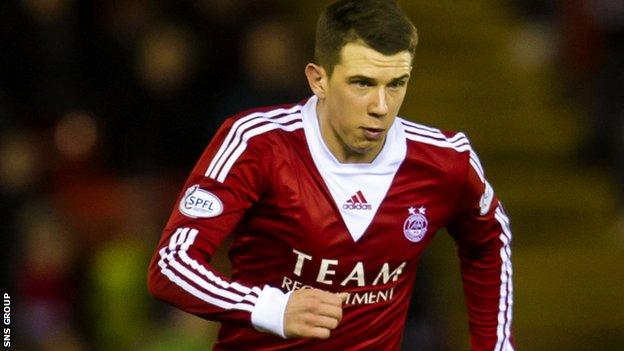 Aberdeen will be without injured midfielder Ryan Jack for Saturday's League Cup semi-final against St Johnstone.

The 21-year-old was carried off on a stretcher following a challenge from Motherwell defender Shaun Hutchison in a 2-2 draw at Fir Park.

Jack is expected to be sidelined for up to eight weeks with a hip injury.

"Ryan suffered a double tear in the hip area and will now sadly miss our semi-final this weekend," the club said.

"I thought it was a poor challenge," he said at the weekend.

"I know there is a touch on the ball from Hutchison but for me there is only someone going to get hurt in that challenge.

"It is reckless at the very least. "In real time I did wince. I thought it was a straight red and having seen it again, I think you would lean more towards a red than a yellow."

But he defended his centre-back, adding: "Shaun 100% wins the ball, there is no doubt. It's a yellow card in my eyes."

Aberdeen face Tommy Wright's side at Tynecastle for a place in the League Cup final.