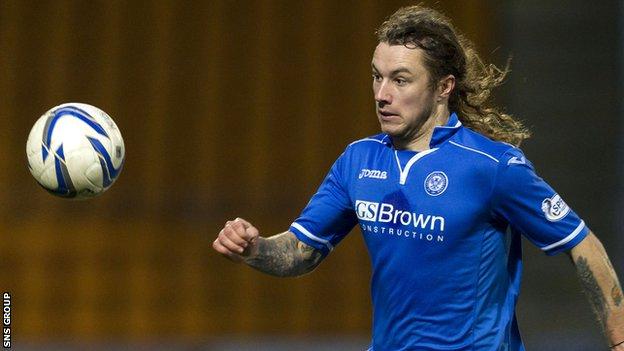 St Johnstone assistant manager Callum Davidson believes striker Stevie May has all of the attributes to lead the attack for Scotland.

The 21-year-old has yet to feature in a Scotland squad but is the Premiership's joint-top scorer with 16 goals.

Davidson was capped 19 times and is confident May can also enjoy a good international career.

"I think he's one of those players who could go on and become a top, top player for Scotland," he said.

"I look at the way Scotland play and they always play a lone striker.

"Kenny Miller played it for years and did it brilliantly. He runs the channels, holds it up and brings other people into play.

"Stevie does exactly that and he scores goals so he has to be there or thereabouts, especially if you are planning for the future."

Davidson told BBC Radio Scotland's Sportsound that he was "surprised and delighted" that May was still at McDiarmid Park going into the final week of the January transfer window.

Peterborough and Rotherham had bids for the striker, who had prolific spells on loan at Alloa and Hamilton in the previous two seasons, rebuffed last year.

"I'm quite surprised no bigger teams have come in for him," said Davidson.

"We set a target of 20 goals for him and he's hit that already.

"His level of performance has got better. He's improved his all-round game, especially his linkage play and he's kept the goals in his game.

"He can play out wide, he can play in the hole as well as up top on his own or in a two. For me, he's got the lot.

"Over the last five years or so quite a lot of young lads have gone down to England and disappeared. Hopefully, that won't happen to Stevie and maybe he's learned from that."