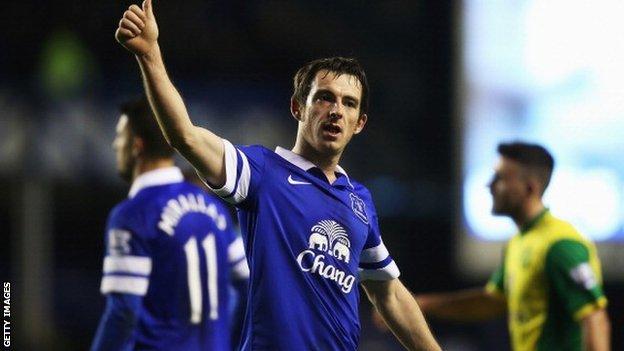 Former Toffees boss David Moyes twice failed in his efforts to take the 29-year-old England left-back with him to Manchester United last summer.

"From every angle that you look at it, it is an incredible boost," said Everton manager Roberto Martinez.

"He is one of the best left-backs in European football and has the World Cup around the corner. I'm looking at what Leighton can do and it is huge."

Baines told the club website: "I've loved every minute of being here since I first joined in 2007 and I couldn't be happier."

Baines insisted transfer talk of a possible move to Manchester United had not affected his performances.

"Of course it was on my mind at times away from pitch because I was getting asked about it everywhere I went but I hope the supporters could see that I didn't let it affect me at all once I crossed the white line.

"I've never been one to relish the limelight so I suppose I'm glad that the speculation will go away now."

Baines, signed for £6m from Wigan in August 2007, had 18 months remaining on his contract.

Manchester United had been linked with the attacking full-back after failing with two bids before the start of the season, but Moyes, who replaced Sir Alex Ferguson at Old Trafford, will now have to look elsewhere.

"His best is yet to come," added Martinez of a player who has made more than 260 appearances for the club.

"To be able to secure Leighton's best years at Everton means a lot, especially in this January window where we are talking about having a strong squad going into the second half of the season.

"That is an important moment for us. You are talking about January signings and bringing players into the club but no-one will be bigger than having Leighton Baines focusing on being as good as he can be for Everton in the best years of his career."

Securing the defender's long-term future is a boost for Everton ahead of Tuesday's Merseyside derby with Liverpool.

Both clubs are vying to finish in the top four, with the Toffees one point adrift of Liverpool, who occupy the final Champions League qualifying spot.

"We are all aware of the importance of the derby in itself but this one is with extra significance with two teams playing to finish as high as possible," said Martinez of the Premier League trip to Anfield.

"We are facing one of the toughest teams in the division. At home they are very strong. They are the best team from scoring from dead ball positions and we have to be wary of that."

Martinez said the club would know within the next two days whether John Heitinga would remain at the club, with the Spaniard revealing two European teams were interested in signing the Dutch defender.