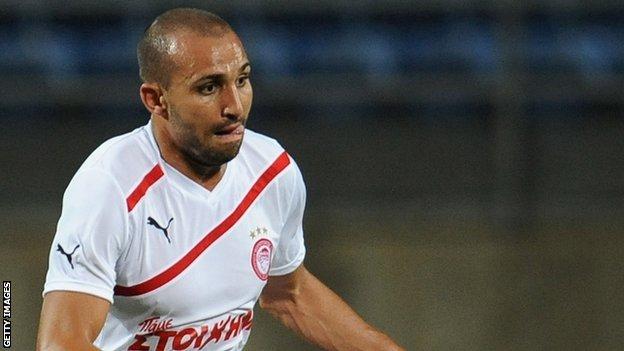 Nottingham Forest have confirmed the signing of Algeria striker Rafik Djebbour from Olympiakos on a two-and-a-half-year contract.

The 29-year-old scored 39 goals in 56 league games for Olympiakos and has been on loan at Turkish side Sivasspor.

The forward also has Champions League experience with the Greek champions.

Reds chairman Fawaz Al Hasawi said on Twitter: "I am delighted to announce the transfer of Djebbour is complete. Please join me in welcoming him."

Djebbour announced on Twitter on Saturday that he had signed for Forest after passing a medical.

"I'm so proud to become one player of this fantastic historic English club," Djebbour said.

Forest say they pulled out of a deal to sign Djebbour in the summer after he refused to take part in the full medical.

Following the collapse of the initial transfer, he has been on loan at Sivasspor, scoring twice in 10 league appearances this season.