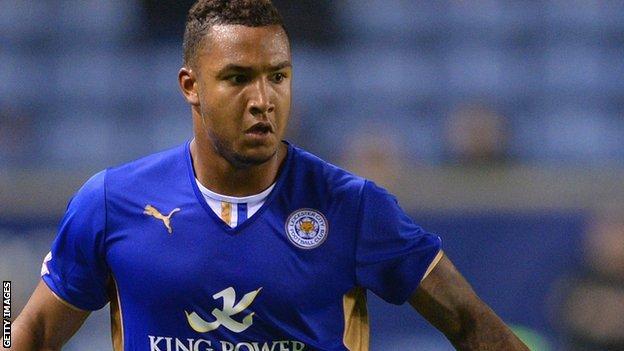 The 20-year-old crashed into a goalpost during Saturday's 2-0 victory over Middlesbrough, and was replaced by Marcin Wasilewski inside 10 minutes.

Moore will miss the next four games, including the trip to Nottingham Forest on 15 February.

Pearson said they may also look for an emergency loan to provide cover.

Wasilewski is likely to retain his place against Birmingham on Tuesday, while on-loan Arsenal defender Ignasi Miquel could return from a thigh injury for Saturday's trip to Bournemouth.

"We will just have to see how things develop over the next week really," Pearson told BBC Radio Leicester.

"Hopefully Iggy will be back available for the weekend, so as along as we can avoid any more injuries we should be okay.

"We might [look at loans], but that is for the future. We certainly won't do anything before tomorrow [Tuesday's match against Birmingham]."

England Under-21 international Moore has made 27 appearances for the Foxes this term, and his partnership with captain Wes Morgan has been a key factor in helping City open an eight-point lead at the top of the Championship table.

Leicester have this month rejected two bids from Fulham for the defender.